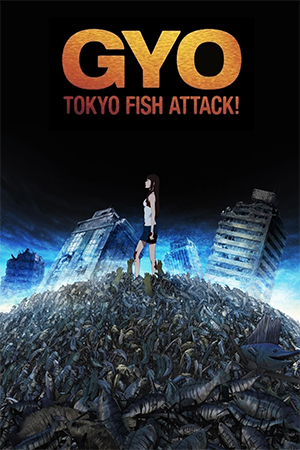 ‘GYO: Tokyo Fish Attack’ certainly does what it says on the tin: fish attack Tokyo. It also introduces something called the “Death Stench,” humans turn into bloated green monstrosities and, oh yeah, the fish all sport mechanical legs making them appear as some sort of cyborg-fish hybrids. Oh, and almost forgot, some sort of fish/zombie circus also shows up! Attempting to summarise ‘GYO’ coherently and succinctly is somewhat a task in itself as its more of an experience though admittedly the narrative is pretty straight forward: a group of teenagers attempt to survive the mutant fish attack with one of them venturing from Okinawa back to Tokyo to find her love who may or may not be dead from a giant robot shark attack. Along the way she teams up with a young cameraman, out to document the event, and the two attempt to find out what caused this crazy fish uprising.

Strange, gross, manic and bonkers are all good terms to help describe ‘GYO’ but the film is also curiously gripping. Whether it’s the insaneness of the images and sequences unfolding on screen, the plight of the young female protagonist or the need to know just what the hell is going on, ‘GYO’ is always watchable. The well rendered mix of 2D and CGI animation gives the film a unique look and with a 70 minute runtime proceedings don’t have long to dwell on how, well, insane everything has become. One is never far away from a giant biomechanical shark attack, or hordes of mutant fish causing planes to crash in spectacular fashion, or robot squid monsters, or the totally bizarre sight of bloated green humans (who also now have biomechanical appendages!) emitting noxious gases from their posteriors. Quite!

In amongst all this ludicrousness there is a bunch of teen drama (that manages to take in bullying, regret and a surprising amount of sex and nudity!) and the makers do make some sort of attempt to explain what is going on. Sort of: seriously, what was that circus all about? This coming from the mind of Junji Ito (‘Uzumaki’) it’s not surprising how weird, random, inexplicable and just plain gross ‘GYO’ is. I’m not sure how close the film sticks to Ito’s original manga that it is based on and there could have perhaps been less teen angst but as a creature feature, an anime, and a journey into the surreal ‘GYO’ is a (peculiar) triumph.