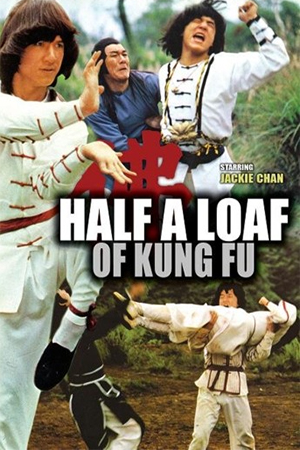 Before ‘Snake In The Eagle’s Shadow’ popularised kung-fu comedy in Hong Kong cinema, ‘Half A Loaf Of Kung-Fu’ focused on what would be the next big thing on the Jade Screen. Jackie Chan takes the lead role as a hopeless buffoon who dreams of being a kung-fu fighter, but is considerably short of his goal. Instead he must rely on the scraps of knowledge he’s thrown by the various characters he meets on his travels. After a chance encounter means he is passed off as the famous ‘Whip Hero’, Chan is sent on a mission to guard a convoy that is carrying a valuable cargo across China. Gradually, Chan finds that his kung-fu knowledge is increasing and, with the help of a wandering beggar, he finds that he’s reached a competent level. These new-found skills come in very handy when he is drawn into a series of showdowns with the countless bandits who are tracking the cargo and planning an attack.

By no means a classic, ‘Half A Loaf Of Kung Fu’ is still an undemanding and quite enjoyable early Chan film. The comedy that punctuates the film is messy and scattershot as is the action, but the film retains a pleasant experimental flavour and when put into its historical context it is quite unconventional. It’s likely that Chan fans who are used to his Hollywood efforts will be totally alienated by the film, but for seasoned Hong Kong film fans it’s a bit more comprehendible. One point of particular interest is the excellent credit sequence; long before Stephen Chow, Jackie Chan provides a superb lampoon of kung-fu films that remains amusing today.