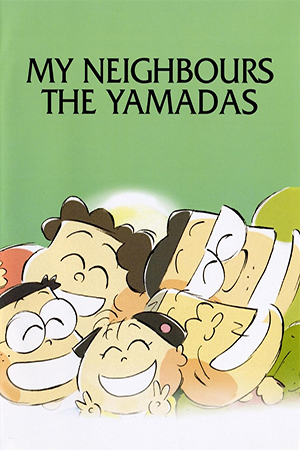 Takashi Yamada and his wacky wife Matsuko, who has a severe dislike for housework, are attempting to navigate their way through the ups and downs of work, marriage and family life. Amongst their brood is the sharp-tongued grandmother who lives with them; a teenage son who wishes he had cooler parents; and a pesky daughter whose loud voice is unusual for someone so small. Hell, even the family dog has issues!

Although their movies have occasionally strayed into odd territory (Tanuki bouncing on their testicles anybody?), ‘My Neighbours The Yamadas’ is considered by many to be one of the most unique entries into the Ghibli back catalogue. Based on the yonkoma (comic-strip) manga ‘Nono-chan’ by Hisaichi Ishii, the film stands out because it isn’t really a film at all. Rather than containing one long, continuous story, the movie is made up of a compilation of anecdotes that centre around the daily lives of a somewhat dysfunctional family. Despite this rather odd format though, ‘My Neighbours The Yamadas’ still works simply because the characters are so damn relatable. These aren’t perfect examples of mankind or a Waltons-esque family, it’s just a very familiar group of people who get into awkward situations and don’t always see eye to eye. Of course, this also allows for plenty of comedy gold as the characters constantly try to one-up each other, and they even find time to throw in a little heart as the family always know the right time to band together.

Another obvious talking point for ‘My Neighbours The Yamadas’ is the somewhat simplistic animation style. Much like its original source material, the artwork here has a very sketch-like look and it is easily one of the most visually simplistic animated outings in the Ghibli hemisphere. This is not to say that it is without charm though, because there is something about the way the characters are drawn and emote that is always amusing to watch. If I had to liken it to anything then it would probably be the ‘Shin Chan’ series, as both have that almost crude style of drawing faces and when characters scream or shout it normally just involves a flailing mouth. It may not be to everyone’s taste and it’s definitely unlike any of the other Ghibli movies, but I think after you settle into the movie’s humour then it really does start to grow on you.

Even though it feels a bit more like a series of shorts than a movie, ‘My Neighbours The Yamadas’ is another immensely entertaining outing from the Ghibli stable. The quirky humour and lifelike characters constantly entertain and this is definitely one you’ll want to revisit time and time again.