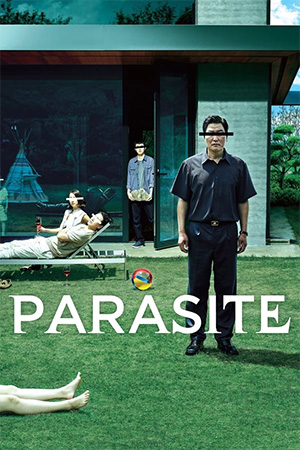 Have you ever felt like a fraud? Ever doubted your own self-worth? Do you worry that someday you’ll be “unmasked” and that everything you’ve worked for—your job, your family, your entire life—could suddenly be taken away? If the answer is yes, then you may be suffering from imposter syndrome, an increasingly common psychological phenomenon. But what if you actually are an imposter? That’s the delightfully perverse twist at the heart of Bong Joon-Ho’s new film ‘Parasite’. By aligning the viewer’s sympathies with a family of grifters, the acclaimed writer/director poses a much darker question: how far are you willing to go to protect the masquerade?

In the opening scene, the film’s protagonists—the Kim family—are depicted as the lowest of the low. Not only do they reside below ground in a filthy basement apartment, but their toilet is perched on a high, narrow ledge several feet above the bathroom floor. To make matters worse, the room’s sole window gives them a veritable front-row seat to watch helplessly as drunken men urinate in the nearby alleyway. From the very first scene, the Kim’s subterranean lair, not to mention its proximity to human waste, immediately conveys the family’s degraded position in Korean society.

Soon enough, we learn that the Kims are a veritable brood of broken dreams: the father Ki-Taek (Song Kang-Ho) is an out-of-work driver and failed entrepreneur, his wife Choong-Sook (Jang Hye-Jin) is a long past-her-prime athlete, and their children Ki-Woo (Choi Woo-Shik) and Ki-Jung (Park So-Dam) have both failed their college entrance exams. They live together in squalor, yet they all hold fast to dreams of a better life.

Opportunity finally knocks with the arrival of Min (Park Seo-Joon), a family friend bearing both a gift and a proposition, the latter serving as the catalyst for the plot. Planning to study abroad, Min must vacate his cushy tutoring job for the well-to-do Park family. Quite fortuitously, the only person he trusts to take the position is his old pal, Ki-Woo. However, there’s one problem: Ki-Woo doesn’t possess the requisite bona fides. Luckily for him, his sister has a knack for forgery. With a phony university degree in hand, Ki-Woo not only aces the job interview but even snags a teaching gig for his sister, although he intentionally hides their familial connection.

Seemingly pushing their luck, the Kims systematically worm their way into the Park household. As a genre, caper films tend to provide a certain vicarious thrill for audiences, and there’s initially a fun, comedic air to Kim’s shenanigans, largely because the stakes involved are a bit more relatable. After all, their goal is not to pull off some elaborate bank robbery or jewel heist but merely to secure steady employment in menial, albeit well-paying jobs. However, unlike most crowd-pleasing capers like ‘Ocean’s 11’, the methods that the Kims employ will likely give viewers pause, as the audience gradually learns that the targets in their elaborate scam aren’t despicable villains at all, despite our initial expectations.

Embodying the picture-perfect upper class family, the Parks serve as excellent foils to the Kims: there’s the successful CEO Mr. Park (Lee Sun-Kyun), his beautiful wife Yeon-Kyo (Cho Yeo-Jeong), teenage daughter Da-Hye (Jung Ji-So), and young son Da-Song (Jung Hyun-Joon). Rather than rely on stereotypes of the rich pulled straight from Korean dramas, Bong Joon-Ho is careful to depict the Parks as three-dimensional characters—neither good nor bad but somewhere in between. Still, the question remains, is there something going on beneath the elegant, too-perfect surface of the Park household? Without spoiling the details, I will say yes— but not in any way you could possibly imagine.

With ‘Parasite’ departing from the international scope of Bong Joon-Ho’s previous films (‘Snowpiercer’ and ‘Okja’), one might assume that the film focuses solely on South Korea’s rigid social hierarchy. However, ‘Parasite’ beautifully captures James Joyce’s sentiment that “in the particular is contained the universal.” For example, midway through the film, a drunken Ki-Taek ponders the fate of another character impacted by their illicit charade. In a burst of anger, his equally intoxicated daughter scolds him, arguing that her father should focus on their plight, not on the suffering of others. Numerous moments like these called to mind real-world connections beyond the Korean political context. In the United States, for instance, people in similar economic situations often find themselves pitted against one another politically, viewing each other not as obvious allies but instead as natural adversaries. Similarly, the film emphasizes the conflict between those desperately trying to hold on to what they have and others simply wanting their own slice of the good life. The genius of ‘Parasite’ is that the Kim family inhabits both these groups simultaneously, thus complicating any simplistic interpretations of the film.

On the level of pure entertainment, ‘Parasite’ is a darkly comic riff on class conflict, one filled with white-knuckle suspense and out-of-nowhere surprises—all serviced by magnificent performances from its ensemble cast. Full of visually suggestive compositions and thematically provocative concerns, the film will unquestionably inspire reams of critical discourse in the years to come. It’s easy to see why ‘Parasite’ won the Palm d’Or at the Cannes Film Festival. Bong Joon-Ho’s latest is no mere pretender to greatness; it’s the genuine article.