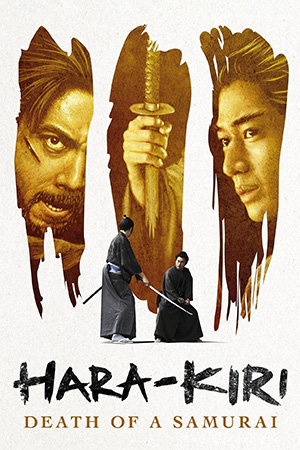 Masaki’s Kobayashi’s 1962 cult samurai flick ‘Harakiri’ is a near masterpiece. A slow burn potboiler about a down on his luck samurai who requests to perform hara-kiri (ritual suicide) in the courtyard of a local feudal lord, the samurai begins to tell his story of what has brought him here to commit such an act and as events turn more tense the samurai reveals his true intentions. The original is a fine slice of chanbara action that if you haven’t seen already, get your ass in gear and do so. Despite being fifty years old it’s still a riveting watch, one of the best samurai flicks this side of Kurosawa and was not really in need of a makeover. However, as is such the trend these days remakes are inevitable and this re-tread comes from the always interesting Miike who just about gets it right and makes this good looking rehash, mostly, worthwhile.

The story and the way it unfolds, even the way it’s shot, is much the same (if memory serves right) as the original with a few plot threads changed and tweaked here and there. Kageyu (Koji Yakusho) is the samurai who turns up at his nearby feudal lord’s palace asking for an audience to hear his story before he commits the honourable samurai death of hara-kiri. Through flashback we discover what brought him to his destination on this quest for vengeance. A rich character study of what it really means to be an honourable samurai and a look at those who abuse this honour, Miike’s interpretation of the story is a beautifully framed and mature film that unfortunately suffers from lagging tension and pales in comparison to its predecessor. Hot off the success of the awesome ‘13 Assassins’ Miike was obviously still in a samurai frame of mind and kudos to him for crafting an all-together different film compared to ‘13 Assassins’. Where as that film was epic and full of frenetic action, Hara-Kiri is quieter, slower to unravel and other than the final minutes contains little action. Gorgeously shot and featuring a brilliant performance from lead actor Koji Yakusho (who was also in Miike’s ‘13 Assassins’), ‘Hara-Kiri’ is riveting in fits and starts and does show the director is perhaps interested in making different kinds of films compared to his earlier excesses: though there is a harrowing scene of samurai suicide that while not particularly bloody is still hard to watch.

Unfortunately, Miike just can’t keep up the tension and the film does sag during some of its extended flashback sequences. These sequences do help to build character and fill in back-story but unlike in the original they feel like filler that pad out the running time unnecessarily.  In an attempt to underplay proceedings and go for the subtle approach, Miike perhaps underplays things a little too much; the film often feels stilted and slow rather than quietly engaging. While remakes have their place and can often be effective, this version of ‘Hara-Kiri’ just simply pales in comparison to Kobayashi’s version and while it’s certainly good for a majority of its run time, you still may be wondering what’s the point of it and that you could just be watching the original instead.

The film was also originally released in 3D: for what purpose I’m not sure. This kind of character drama does not need or cry out for 3D. The text above refers to the 2D version, which looked glorious thanks to some impressive photography and framing that serves the story perfectly well.