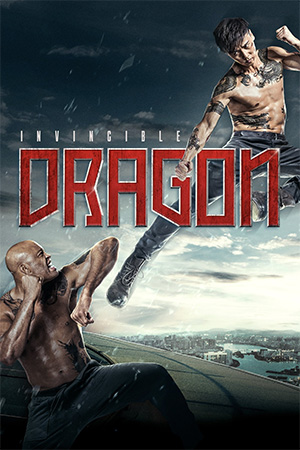 Schlocky but takes itself oh so serious would-be actioner that isn’t silly and soaked with action enough to make it fun instead drowning under lots of unnecessary tedious drama. Which is a shame as ‘The Invincible Dragon’ had a promising premise. Impulsive cop Kowloon (Max Zhang) is relocated to a nowhere police station after his over-the-top antics prove him to be more of a danger than a bonus to the big city police force. Upon relocation he takes up the case of local policewomen being murdered by an unknown assailant. When his antics again get him into trouble leaving his policewoman fiancé dead and him injured, Kowloon disappears into self-imposed exile. A year later the murders begin again in Macau and Kwoloon is sought out to help in the investigation, giving him a chance at redemption.

What at first seems like a throwback to the crazy antics of 80s Hong Kong actioners, quickly dissolves into a melodramatic drudge. The opening five minutes feature a nifty escape from capture, over-the-top gunplay, Lam Suet getting his arm blown off and a 9-headed CGI dragon (yep, that’s right!): all before the title rolls. However, this set-up for silly awesomeness is soon jettisoned in favour of drama, redemption tropes, something about living dragon tattoos (!) and training montages, which would all be fine if it was at all engaging. Alas, despite the cast’s best efforts, it’s not and one will soon find themselves wishing for more of the silly action that opened the film. This does eventually arrive around the hour mark and the choreography by Stephen Tung Wai (‘The Blade’, ‘Hero’) and Jack Wong (‘Wolf Warrior 2’) is decent but often rendered average due to the dreaded over reliance on CGI “enhancement”.

Max Zhang (who was so good in ‘SPL 2’ and ‘Masater Z: The Ip Man Legacy’) comes across as a melancholic bore though certainly cuts loose when the action finally arrives: getting a decent one-on-one with UFC fighter Anderson Silva in a deserted police station. Some bite is added via JuJu Chan Szeto’s bad girl (she should have been the main antagonist!) who also gets a decent scrap but it’s not enough to save the film. ‘Made in Hong Kong’ and ‘Dumplings’ director Fruit Chan doesn’t quite make a successful leap to action films, his flick see-sawing too much between dire drama and ridiculous CGI-tinged action and never finding a cohesive balance between the two. If ‘The Invincible Dragon’ had just embraced its barmier B-movie aspects (it has a 9-headed CGI dragon in it for crying out loud!) and run with them, then this could have been a fun throwback to action films of yesteryear.