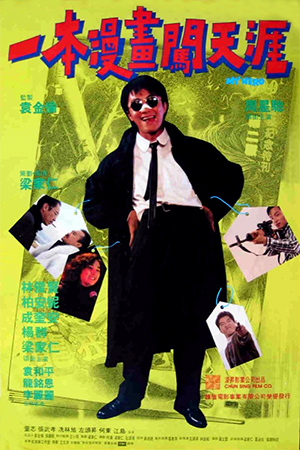 Sing (Stephen Chow) is a humble waiter in a night club who is obsessed with comic books that glamorise the gangster lifestyle. One day Sing finds himself in the middle of a gangland shootout and he is able to warn one of the big bosses so that he narrowly escapes death.  Saving a triad boss is of course a pretty big thing so Sing is offered a job within the organisation as a way of repaying the debt.  Teamed with Chun (Lam) and Bill (Fui-On), Sing soon finds himself on the way to the top even though he is unable to shoot a gun, fight or perform any kind of criminal activities.  Of course, his liabilities do not go unnoticed and when it looks like Sing may cause problems his life suddenly becomes meaningless to the triads.

‘My Hero’ appeared at the back-end of Chow’s short liaison with the heroic bloodshed genre and as such, contains a sprinkling of comedy in amongst the usual action and drama.  This makes it an ideal vehicle for Chow as it allows him to display some flashes of his comic persona (most notably some amusing parodies of gunplay flicks) as well as highlighting his often overlooked acting ability. It’s also nice to see him teamed with Wilson Lam and Shing Fui-On, two veteran performers who are always enjoyable when they’re playing the criminal element.

‘My Hero’ is unlikely to blow you away, but it’s still a decent 90’s gangster flick that benefits from Chow’s inclusion. If you consider yourself a fan of anyone involved, then it’s definitely worth adding to your collection.