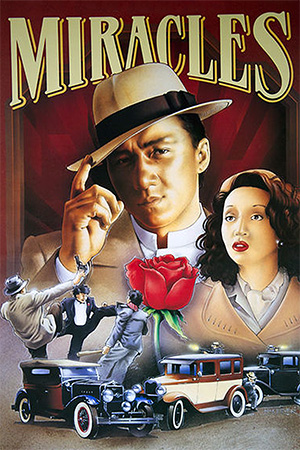 Jackie openly admits that this film was intended to answer the critics who saw him as just an action star/director. What an answer it proved to be!

After a series of mishaps on arriving in Canton, Koo (Chan) is accidentally put in charge of a powerful gang of mobsters. Having proven himself to be anything but a pushover, he is given the unpleasant task of negotiating with roguish crime boss Tiger. However, he also feels the need to help an elderly lady whose roses he links with his own change of fortune. The rose seller’s daughter is due to visit with her future husband and father-in-law, but all three are under the impression that she is a wealthy lady of high society. Koo and his friends organise an elaborate hoax and turn the humble rose seller into a real social climber. As the deception gets more and more complicated, Koo also has please Tiger to avoid a gang war. All is resolved in a thoroughly satisfying conclusion.

The aforementioned critics who claimed that Jackie was just an action star had obviously forgotten ‘Project A’; ‘Miracles’, however, proved his worth beyond all doubt. His skilful direction includes some spellbinding cinematography and masterful handling of some fairly complicated material. The quality cast that were assembled give a number of fine performances with Anita Mui and Bill Tung heading the list of plaudits. The action in the film is not the vital cog, but still proves to be of Chan’s usual high standard; the fight in the rope factory is a must-see scene. Without doubt, a masterpiece.