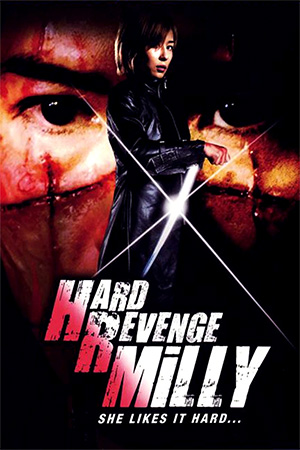 In a near-future, post-apocalyptic Japan, Tokyo has become a wind swept desert. Butchered and left for dead after witnessing the brutal murder of her husband and child, Milly (Miki Mizuno) is given a second lease of life thanks to the use of mechanical technology. However, her only real purpose for staying alive is to see justice served so she sets out on a quest to track down and kill the people responsible for killing her family.

‘Hard Revenge, Milly’ is your typical slice of Japanese VCinema that comes complete with futuristic backdrop, mean and moody heroine, and, of course, a hell of a lot of blood. Unlike other entries into the genre though, this is a fairly short-lived experience that clocks in at a mere 45 minutes. Surprisingly, the majority of this time is actually spent trying to establish a back-story, which basically involves Milly wandering around looking angry while flashbacks uncover her horrific past. Unfortunately, it’s all a touch too shallow and predictable to truly captivate, but it is still far better than just filling the film with a handful of pointless fight scenes (are you listening ‘Geisha Assassin’?).

Considering this genre is synonymous with action, it’s surprising to see that ‘Hard Revenge, Milly’ only really has one proper bout of combat. This scene takes place during the final 15 minutes and sees Milly going toe-to-toe with the man responsible for butchering her family. Although it doesn’t exactly contain anything groundbreaking in terms of choreography, it is still a relatively enjoyable fight that mixes some decent kicking skills with passable wirework. As is the standard with these films though, it’s the gore that really makes it stand out and the way in which Milly dispatches of her opponent is both extremely inventive and utterly hilarious.

‘Hard Revenge, Milly’ is a short burst of blood-soaked fun that is likely to please fans of this ever-expanding genre. That said though, it doesn’t really offer up anything all that special and certainly isn’t required viewing by any stretch of the imagination.