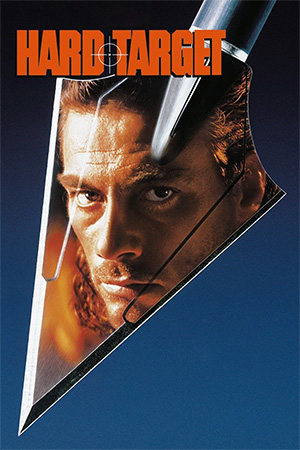 Chance Boudreaux (Van Damme) is an ex-army Cajun hired by Natasha Binder (Butler) to help her locate her father.  After asking around they discover that he was in fact homeless and employed by a local escort service to hand out flyers.  When the pair begin investigating the firm, a secret organisation is uncovered in which vagrants are used as hunting sporting for the rich and famous.  Unfortunately, Boudreaux is soon exposed and becomes the next target, but he is more than a match for any man and the hunter suddenly becomes the hunted.

After scoring a surprise international hit with ‘Hard Boiled’, John Woo finally chose to make his English-language debut with the highly underrated ‘Hard Target’. Some say that the studio expectations in Hollywood force every director to make compromises, and that they eventually wind up making the standard mainstream rubbish. Perhaps you could argue that this is true of Woo’s recent outings, such as ‘Mission: Impossible 2’, but ‘Hard Target’ is actually a pretty good reinterpretation of his Hong Kong style of filmmaking.

Picking Van Damme to play the lead in ‘Hard Target’ was a controversial choice, as many hardcore Woo fans expected him to pick an American actor who was more akin to the likes of Chow Yun-Fat. However, for this style of movie he actually slots in pretty perfectly and carries the movie very well. Sure, his accent can make some of the dialogue unintentionally amusing and he certainly likes to strike a pose or two, but he’s a great on-screen presence who looks like an unstoppable killing machine. Yancy Butler on the other hand, is a little less appealing. Admittedly she doesn’t exactly have a lot of dialogue to work with, but she does seem rather wooden at times and often disappears into the background. Thankfully we get a lot more talent in the villain department, with Lance Henriksen and Arnold Vosloo really stealing the show. Not only do they seem to get some of the best lines, but they really ham it up to the extreme and are excellent throughout.

The action sequences in ‘Hard Target’ often feel a bit like a greatest hits montage of John Woo’s previous work. Of course this is by no means a bad thing, as the majority of audiences hadn’t seen his earlier films and the action was often so good that it was worth repeating. That being said, there’s still a fair bit of freshness in here as well. Alongside the usual dual gun-toting shootouts and motorcycle chases, we get some pretty well-handled fist fights and a few sequences using a crossbow that were so stylish that they even made it into the film’s promos. It also has to be said that Woo really gets the best out of Van Damme, utilising just the right amount of slow motion to show off his signature kicks to great effect.

‘Hard Target’ always seems to be credited simply as John Woo’s first American movie, but I actually think it is more accurately labelled as his best Hollywood outing. It manages to recapture a lot of his action movie magic, as well as making the most of its star power. Just don’t go in expecting ‘The Killer’ or ‘A Better Tomorrow’.