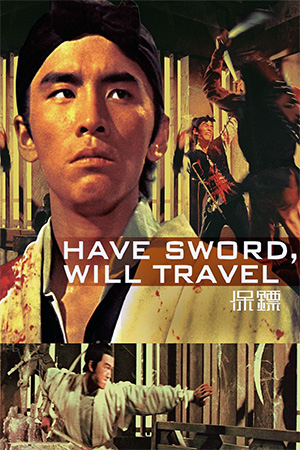 The Iron Triangle of Chang Cheh, David Chiang and Ti Lung tackle another swordplay drama, though this time Chiang’s and Lung’s well-shaped character types are slightly adjusted here.  Audiences are familiar with David Chiang as the cocky, cheerful outsider who happily fights his way through any problems, but his character in ‘Have Sword, Will Travel’ is slightly more ambiguous in tone and is perhaps the ultimate definition of an ‘outsider’. The further twists in character and theme will be expounded later – now there’s the small matter of the story to explain.

Every year, Lord In transports a bullion of government gold across China assisted by his formidable clan who also hail from the appropriately named ‘Invincible Village’. Although this is an assignment that is full of danger due to the value of the cargo, In has never disappointed his employers before as his martial arts skills are seen as the best in the land – even greedy bandits are not prepared to attack such a formidable escort. This year, however, is different; Lord In has a serious illness that has all but destroyed his martial arts skills, though he has managed to keep this a secret from nearly everyone. As a precaution, Lord In calls on the services of famed swordsman Siang (Lung) to accompany his men on the journey and hope that the bandits are unaware of the serious turn that his health has taken. Unfortunately, the notorious ‘Flying Tiger Stockade’ have heard the rumours and see In’s weakened state as an ideal opportunity to ambush the convoy and steal the impressive cargo. The intervention of a stranger sees matters further complicated, however, and neither Siang or the Flying Tiger Stockade know whose side he’s really on. The man, Lo (Chiang), briefly demonstrates his extraordinary skills to both parties creating differing emotions on either side; Siang suspects him of being a potential threat who may be allied to the enemy while the Flying Tiger Stockade are keen to hire his services.  Siang’s distrust is furthered when he notices his fiancée Piau Piau falling under the spell of the highly skilled yet peculiar newcomer. Although Lo constantly asserts that he wants to help Lord In and refuses any reward, Siang is gradually eaten up by jealousy as he fears Piau Piau is falling in love with his rival. When the Flying Tiger Stockade finally attack, this jealousy needs to be forgotten or neither man will survive.

Although the storyline of ‘Have Sword, Will Travel’ concentrates on a well-developed, yet straight-forward heroes v. bandits plot, it’s fair to say that the main dynamic is the uneasy relationship between Siang and Lo. As I touched on earlier, Chang Cheh has given the character’s a slightly unusual twist in this somre drama; Lo is not the usual Chiang hero while Ti Lung, while still the matinee idol, is a more flawed figure than normal. For such a slight subversion of his traditional characters, Chang Cheh deserves some extra credit – his virtues as a director are something I’m always ready to parade, but it’s good to see him focus on more dramatic tensions. Cheh also plays with the audiences’ concept of who the hero is; the opening frames seem to indicate that Ti Lung will be the superheroic lead man, but Chiang’s introduction tips this on its head. ‘Have Sword, Will Travel’ is not revolutionary, but contains some inventive touches that show how versatile the genre can be.

This is one of those films, though, where I cannot think of a major flaw, but I still cannot commend it as with many other Shaw Brothers’ films. It perhaps becomes one of those films that’s easier to admire than be fully absorbed in; the narrative is expertly constructed, but fails to be as involving as other Chang Cheh epics. Nonetheless, ‘Have Sword, Will Travel’ is aided by an intriguing David Chiang performance and a scene-stealing turn by Ku Feng. Feng oozes menace while still appearing calm and unwavered, creating a villain who is a significant presence in the film. In retrospect, the final ambush of the Flying Tiger Stockade may have been an anti-climax considering how much potential Ku Feng had generated. Whatever criticisms I may have for the film, it remains a mature swordplay film with much to recommend it. Fine performances, good cinematography and a well-paced storyline – despite the difficulty on my part to pick out its failings – will offer most viewers a rewarding 100 minutes of entertainment.