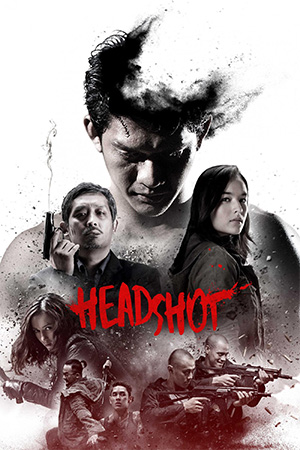 The directors of ‘Killers’ team up with half the main cast of ‘The Raid 2’ to create a wild, blood soaked tale of vengeance which sees Iko Uwais wash up on a beach one day, bullet lodged in his head with no memory of who he is or how he got there. Taken to a nearby hospital, he’s put under the care of kindly young doctor Ailin (Islan) who takes a special interest in him not least because of the mysterious bullet wound to his head. As his memory slowly inches back, the man with the headshot soon learns of his incredible fighting skills as his deadly past comes back to hunt him down.

Mixing Tjahjanto & Stamboel’s penchant for excessive violence with the athletic martial arts prowess of Uwais and his team, ‘Headshot’ is part pulp crime picture as the protagonist attempts to recover his memory and part insane action film as said memory seems to bring forth an onslaught of deadly foes for our would be hero to battle. Action and chaos escalates as the narrative reveals Uwais’ true identity with proceedings almost turning into a video game come the second half as our lead takes on a number of adversaries, levelling up each time he defeats one, making his way towards the big bad honcho for an epic final showdown.

Coming with an excessive amount of critical praise, ‘Headshot’ unfortunately doesn’t quite live up to all its ultra-violent hype: least not to this two-bit reviewer. Make no mistake it’s certainly entertaining and delivers the action goods (including an excellent one-on-one fight in a forest and another on a beach) but Tjahjanto & Stamboel perhaps over-egg their want to meld style with crazy action. While the fight scenes are certainly well put together and creativity is in abundance, the pacing is just a little off. The filmmakers rely too much on character’s staring one another out or break up a fight too frequently so characters can pose (and stare some more!) in a cool way before recommencing in combat. Nothing wrong with building tension but it’s just overdone here and robs the action of some of its ferocity. Likewise, the blood and gore is sometimes too over-the-top meaning the dark edge that was originally established is jettisoned in favour of a less satisfying heightened comic book tone.

Still, personal niggles aside, ‘Headshot’ is often a thrilling ride and once again showcases Iko Uwais at the top of his game and that Indonesia is one of the biggest innovators in modern martial arts cinema.