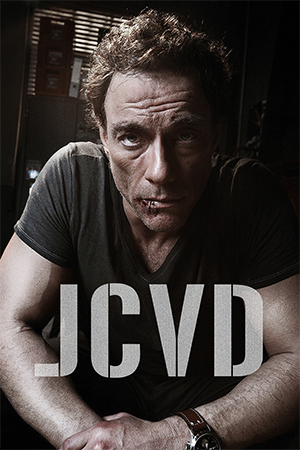 Fact and fiction, art and action all collide head on in ‘JCVD’, a film that dissects and almost obliterates one time action movie god, Jean Claude Van Damme. Playing himself, Van Damme takes a long hard look himself: a hero on screen but a very real human being battling life’s and his own demons off screen. Fans and the public alike may know him as the guy who can do the splits in all those action movies but Van Damme’s real life reputation involves mucho drug taking, marriage failure’s, custody battles and his popularity fading as his films decreased in quality. It’s all laid bare here as he fights for the right to see his child, his money is rapidly disappearing and making action films isn’t as easy when you are pushing 50. However, ‘JCVD’ also plonks the man in a real life heist situation, just like something out of one of his movies, meaning his emotional and personal overhaul plays out as he also attempts to be the hero for real.

At once a riveting dissection of a man known for his martial arts skills and rocky private life but also a rollicking good time, ‘JCVD’ takes a look at the man and the myth and allows Van Damme to indulge in some on screen therapy and give him one of his best acting roles in years. Now playing one’s self is by no means a stretch but Van Damme shows depth, emotion, personality and even humour to a degree he never has done before in any of his straight action pictures. On the one hand the film can be seen as a vanity project, a former big shot spending an hour and a half taking about himself, and in some ways I suppose it is. On the other hand it allows a famous screen presence to show a side of himself we never see and underneath any egos, any amount of crappy straight to DVD movies and split kicks, Van Damme certainly shows he is a real person and when pushed, can even act.

‘JCVD’ also doesn’t alienate all his action movie fans. There is still enough kinetic energy, SWAT teams raiding buildings and even the odd roundhouse to keep the Van Damme action fans happy. In this sense, the film also dissects the action film and its silliness: the real people Van Damme encounters expecting him to be just like his on screen personality. The film opens in grand fashion as Van Damme is shooting his current movie and is attempting to do one long take that involves taking out an onslaught of bad guys. But Van Damme is older, and dare I say wiser, and is having difficulty keeping up with the pace. Action heroes do get old and perhaps it is best to let them retire gracefully than to try and recapture the glory days. But the standout sequence is the unbroken confession to camera that Van Damme delivers during the heist. It’s as if the pause button has been hit and Van Damme takes time out to confess his sins, derail Hollywood and, well, basically cry. And he lets it all hang loose showing that beneath any ego or success there is a lost soul looking for acceptance.

Don’t go into ‘JCVD’ expecting a cruel and vapid look at the shallowness of Hollywood (we’ve seen that a million times in a million other movies) as the film is still a ‘movie’ and a damn, fine entertaining one at that. Critics will enjoy it as it will allow them to enjoy a Van Damme movie without watching ‘a dumb action movie’ while Van Damme fans (myself included) will enjoy getting to see the star do something a little different and add a little meat to all the thrills. Perhaps the only downside is that I would still rather watch one of Van Damme’s straight action pictures (‘Hard Target’, ‘Kickboxer’). ‘JCVD’ is a great film but within his own arena Van Damme was a champion: he made fun, action packed movies. They may not be considered high art (and I’m suspect of what high art really is, as who the hell gets to decide what is and isn’t?) and the man himself may not think much of them either but for a time he made quality action pictures that have their right alongside the rest of cinema.