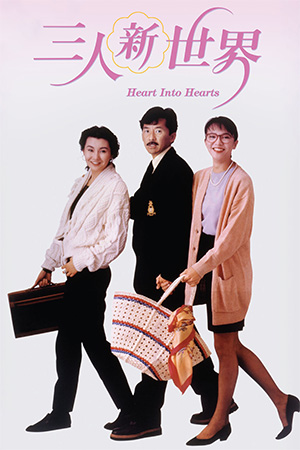 Following on directly from the end of ‘Heart to Hearts’, Alex (Lam) and Ngor (Cheng) are now a couple having negotiated their respective insecurities and now edge closer to walking down the aisle. Alex’s work as an advertising executive means he’s constantly busy and the pressures of his secular work soon take their toll on Alex and Ngor’s relationship. When an attractive new director, Jo (Cheung), starts work on one of Alex’s commercials, the love he has for Ngor is put to the test. This becomes even more evident when Alex is asked to accompany Jo and her entourage to Paris to film the advert, only to find out that the director has more than a professional interest in him.

The surprise hit ‘Heart to Hearts’ was a low-key rom-com that managed to achieve a superb equilibrium between its material and the ensemble cast. George Lam was charismatic in a way hitherto unseen, Carol Cheng displayed her impeccable comic acting and even the supporting players breathed life into the production, making Stephen Shin’s seemingly modest film a very appealing proposition. This sequel, though boasting more impressive production values and a welcome Parisian setting, is pallid in comparison to the original and lacks the spark that made it stand out from the crowd.

‘Heart Into Hearts’ is disappointing for a number of reasons. Perhaps the most obvious failing is the lack of significant on-screen time that Lam and Cheng actually share; much of the appeal of the first in the trilogy was the strong interplay between the leads and the gradual development of their relationship. In ‘Heart Into Hearts’ too much time is allocated to Alex and Ngor’s moments with the newer, but weaker characters. Alex’s brother – played by Hui Siu Hung – and his annoying kids are unwelcome additions to the cast and spend more time with Carol Cheng than George Lam. Such a misguided move away from the central relationship undermines the strengths that the original was built on.

The Paris settings admittedly add another dimension to ‘Heart Into Hearts’, even though if they do play on the typical tourist travelogue shots of the city. It is, nonetheless, good to see Hong Kong actors working outside of their usual environment. Unfortunately these scenes make up less than a third of the film and the majority of the localised moments are weakened in comparison. The final dash to Canada seems pointlessly extravagant, perhaps a sign of the film-makers’ preference to throwing money at the production values rather than concentrating on the simple draw of the original. ‘Heart Into Hearts’ is subsequently a perfect example of the law of diminishing returns, a sequel that tries to impress with its relative opulence but forgets how important its characters are.