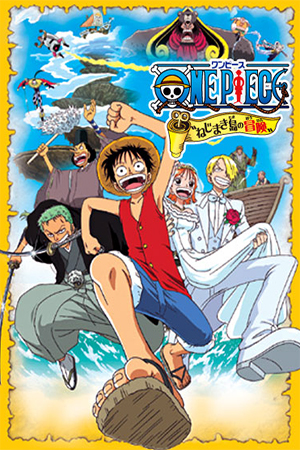 Whilst they are enjoying some all-important rest and relaxation, the ship of the Straw Hat pirate crew is stolen from right under their noses. During their search, Luffy and the gang come across a couple of passing thieves who inform them that it has been stolen by the infamous Trump Kyoudai pirates. Coincidentally enough, they come trundling around the corner at that very moment and a confrontation ensues that leads to Nami’s kidnapping. Now our heroes must save both the girl and the ship so they set sail for Clockwork Island where all hell is about to break lose.

Much like the first ‘One Piece’ movie, this is a short yet sweet affair (around 55 minutes) that sticks firmly to the anime filler rules. This means it’s relatively easy to predict the overall flow of the story and it does feature the standard “small child who our hero can relate to” scenario. However, this really doesn’t prove to be much of a problem here as the audience is soon sucked into the topsy turvy world chosen for this adventure and it always maintains the humorous interactions between the crew. Long term fans will also be pleased to see the addition of Sanji the cook who adds to both the comedic and action elements of the movie.

Talking of action, this isn’t exactly the film’s strongest attribute as it does seem to be a little thin on the ground. This is particularly noticeable for the finale where Luffy appears to defeat the big boss with only two real hits, leaving the viewer wishing the writers had opted for a Die Hard-esque return from the dead. Don’t panic though as the film is not completely devoid of decent action and there are still several highlights, including Sanji demolishing his pig-faced opponent with some solid bootwork and Zoro’s hack ‘n slash affair with an old foe.

Overall then, I’d definitely say that this is another fun footnote for the ‘One Piece’ universe that will easily appease your withdrawal symptoms in-between episodes. One Piece Movie 3 here I come!