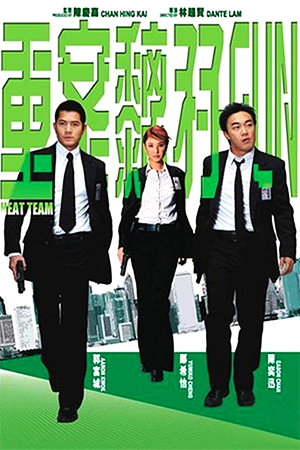 Y.T. Lee (Kwok) and K.C. Chan (Chan) are widely regarded as two of Interpol’s top agents, so when a master thief returns to Hong Kong to conclude a job, it’s only natural that their skills are called on by the police force. On arriving though, both Lee and Kwok are shown to be jealous rivals both with serious character deficiencies; the former is ridiculously nervy around the opposite sex while the latter is a selfish cad. The rivals are thrown together by their new superior Bobo (Cheng) and immediately sent out to follow up a few leads. One such investigation sees a beautiful suspect detained (Wu) and the mismatched cops whittle away the hours trying to get information from her. Eventually her information is forthcoming and Lee and Chan set up a trap to catch the elusive superthief. As the target approaches though, it quickly becomes clear that the informant is playing both sides against each other.

Originally touted as a sequel to the modestly successful ‘Hit Team’, ‘Heat Team’ proves to be a very different creation. In fact, though Dante Lam is once again in the director’s chair, the tone and style is completely different to that of the sombre ‘inspiration’. Lam has carved out a career in film-making that seems to hinge on pulling the carpet from under its audience, throwing commercial aspirations together with moments of what can only be described as bewildering surrealism. ‘Heat Team’ is a production that sums up Lam’s unusual tendencies in a neat 90 minute package, combining what is enjoyable and vaguely infuriating about most of his work.

The opening ten minutes has a healthy dash of humour – something that a good action film can always benefit from. Kwok and Chan are quickly shown as complete opposites, a device commonly used in these ‘buddy-cop’ films to create some initial rivalry for the protagonists. lam plays with this idea quite successfully in the story’s opening; the director toys with their heroes’ inflated opinions of themselves and their petty games of one-upmanship. Gradually though, the film’s focus is blurred and any hope of a tension filled atmosphere dissipate as Lam tries to put his own sense of quirkiness on screen.

The ‘quirkiness’ and bizarre romantic entanglements seem to have far more in common with the peculiar ‘Runaway’ than the original ‘Hit Team’. A plot is started – one with enough potential to make a good template for a genre film – but appears to be ignored for the weak mid-section of the film. A character driven piece like this may be fine for a small scale drama, but this is meant to be a rollercoaster ride and little else. The fact that two such contrasting styles of direction are fused together by Lam does little for the overall cohesion.

One minor triumph for this otherwise average film is the unusual casting employed here. Aaron Kwok is no longer the swaggering charmer – that honour is given to Eason Chan. Kwok is cast as a shy, insular character that is far removed from many of the roles he has played in his career. This subtle subversion of the viewer’s expectations is one of ‘Heat Team’s plaudits, as is the use of some interesting supporting players. Danny Lee takes up the role of police commissioner, a role that used to be his own until Hui Shiu Hung (who appears as an informant) entered the fray. There’s a strange twinge of nostalgia seeing him return to a familiar role despite the fact that ‘Heat Team’ shows how different film-making is today compared to the Hong Kong 80s heyday. In a small role, Carl Ng is also quite a welcome injection of characterisation – although he doesn’t get the best lines here, his Chinese-cockney schemer is a breath of fresh air.

‘Heat Team’ will undoubtedly baffle more than it will appease; the fractured style and severe lack of focus on what the film actually wants to achieve is difficult to forgive. It starts out as a bright and breezy, well-paced action comedy but along its journey to the end becomes a very different creation. While Dante Lam is a director who certainly has his talents, he needs to find a project that will galvanise either of his styles and not try to put all of his proverbial eggs in one basket. ‘Heat Team’ could’ve been a kinetic genre film or a character-based ensemble piece – the mistake that Lam makes is trying to combine the two.