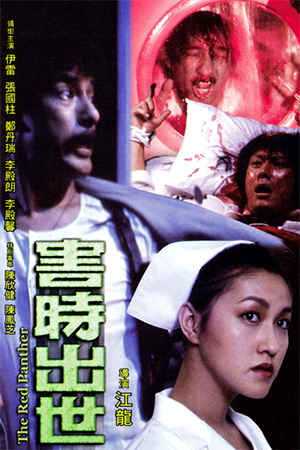 During an outdoor Peking Opera performance one of the troupe is attacked in a toilet cubicle, moments later to stumble into the waiting crowd with his innards spilling from a gaping wound in his abdomen. By luck, detective Lei (James Yi Lui) is present at the show, accompanying his mother, and quickly takes control of the situation. Back at police headquarters the coroner determines the murder not only one of a serial killer, based on three similar cases prior, but also that of someone with intimate medical knowledge. The successive murder of a bar hostess puts a fire under Lei to solve the case swiftly or face the ire of his superiors who are running out of answers for the press.

Suspicions initially settle on suburban GP, Chu (Chang Kuo-Chu), whose clinic the hostess had visited for consultation with a malignant breast cancer tumour. Placed under constant surveillance, Chu is soon absolved as their prime suspect. When Lei’s elderly mother (Chan Lap Ban) narrowly avoids the scalpel of the killer, the detective surmises he must be closing on his target. But who does that leave? Failed medical student, Keung (Lawrence Cheng), or possibly Chu’s own sister (Lee Din-Hing), a respected local hospital practitioner? Or are Lei’s list of suspects overlooking less obvious avenues? With girlfriend, and nurse, Margret (Margaret Lee), in tow Lei finds time running out before the murder strikes again.

Common misconception dictates that Hong Kong horrors are, by and large, given over to a healthy injection of comedy and/or humour which in turn diffuses much of the thrills and horror of the region’s genre films. While this is arguably true of the majority of horror titles that followed in the wake of Ricky Lau’s successful ‘Mr. Vampire’ (1985), as the successive opening of the history books that came with the belated widespread availability of a sizable portion of the Shaw Brothers library will attest, Hong Kong has long harboured a strong lineage of “straight” horror for the better part of the last sixty years (if not longer). That said, though outward appearances would have one believe otherwise, Kong Lung’s early eighties slasher ‘The Red Panther’ (1983) is not nearly as “straight” in the delivery of its horrors as one might suspect. Of course, the presence of latter-day eighties funny man James Yi Lui (of ‘Hex vs. Witchcraft’, 1980, and ‘My Darling Genie’, 1984) in a leading role should clue in many that Kong’s film may harbour a much lighter tone than the poster art and lobby cards would imply. It can be safely said that, in the annals of Hong Kong’s surgical horrors, ‘The Red Panther’ is not on the same playing field as ‘Night Caller’ (1985) or ‘Dr. Lamb’ (1992).

After a startling opening, as well as follow-on sequence in the local morgue where the camera lingers on every gruesome wound inflicted on the killer’s unwilling “patients”, the story segues into what will become the central focus of much of its running time: boisterous and painfully un-funny “comedy” episodes and vignettes, often engaged by actors who shout, scream or screech their dialogue at one another at the top of their lungs until the whole thing descends into one endless cacophony of excruciating, ear-drum bursting noise. Indeed, those unaccustomed to earlier Hong Kong comedy and its predisposition to fall into farce as well as broad slapstick may have trouble making it through ‘The Red Panther’s first act. Much of that first act, and the murder investigation itself, grinds to a halt so that the viewer may be treated to the “hilarity” of Lei’s ongoing troubles with a bad bout of haemorrhoids or his unwillingness to pay the cost of a hotel room so that girlfriend Margret might dodge his domineering mother (whom he lives with).

Where the film does manage to come alive is in the various set-pieces revolving around the shadowy serial killer surgeon. Effectively, though not startlingly, shot by Yu Chun (who worked on John Woo’s ‘Last Hurrah for Chivalry’, 1979) the film exhibits a pleasing combination of shadows and light, as well as coloured-gels that have since become almost a cliché of the genre, and there’s some nicely engineered stalking scenes that generate a modicum of suspense. There are a few clever camera effects here and there, most notably one murder mirrored in the eye of a monkey that proves quite striking. The violence itself, whilst often graphic, is largely all after the fact with splayed open and mutilated bodies lovingly captured by Yu’s lens. Perhaps the film’s greatest asset (opposing the awful comedy, which is its deficit), is the way Kong keeps the viewer guessing as to the identity of the killer; there are more than enough red herrings to throw the viewer’s expectations and the final revelation comes as quite a surprise (if not a little implausible).

Sometimes, the search for films that eluded one in their seminal years of Hong Kong cinema appreciation produces unsung or unseen gems, whilst on other occasions that road of discovery runs to a dead end or productions that prove far less than their reputations. ‘The Red Panther’ falls within the bracket of the latter as, although a meagre forerunner to later serial killer shockers such as ‘Dr. Lamb’ and ‘Diary of a Serial Killer’ (1995), the efforts to downplay the (deservedly) serious subject matter over lengthy diversions into dreadfully unamusing comedy shtick ultimately diffuse whatever real horror ideals it may have had. By the time all the shouting, screaming and people arguing at the top of their voices over (effectively) nothing has subsided, the film is already into its final act and the killer is pursuing Lei through darkened hospital corridors. Unfortunately, at that juncture, many more forgiving viewers, thanks to the persistent din of abrasive, shouted dialogue, will have either tuned out or given up completely.