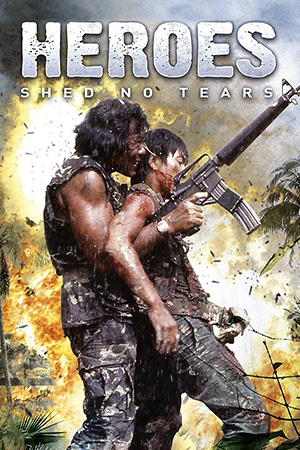 Made before but released after Woo’s genre defining ‘A Better Tomorrow’, ‘Heroes Shed No Tears’ is an earlier effort from the maestro that set the foundations for his incredible career that followed. It’s a rough and tumble movie that may not feature all the elements that became the director’s trademark but the genesis of his style of breathless and violently mounted action is there.

Very much a squad on a mission movie, a rag-tag troupe of Chinese mercenaries are hired to trek into the Thai jungle to kidnap a despicable drug lord. They snatch him and hot foot it through the jungle in an attempt to escape post haste. But not before pissing of a Thai General (Lam Ching-Ying), who relentlessly pursues them in an effort to even the score, thus igniting a bucket load of insanely violent 80s action.

Unsophisticated of plot and character, this is very much a young Woo let loose in the Thai jungle to make an action epic and test out his craft. There is gunplay and explosions galore and while the doves and slow motion may be missing one can see Woo testing action beats that he would later hone and stage even bigger and better in classics such as ‘A Better Tomorrow 1 & 2’ and ‘A Bullet in the Head’. Woo doesn’t hold back either. The film may be over 30 years old but the carnage is still unflinching and mounted with viscous verve. From bloody squibs, burnings and beheadings, ‘Heroes Shed No Tears’ holds nothing back in its onslaught of impressively staged combat.

While the narrative is essentially soldiers on the run, Woo throws in a fair share of additional insanity and sub-plots to keep proceedings engaging. In between all the stellar combat there is hook-ups with prostitutes, some “comedy” gambling shenanigans, and inexplicably the mercenary leader (play by a solid Eddy Ko) bringing his family along on the mission. It’s all a bit of a hodge-podge of threads (some of it forced upon Woo against his wishes apparently) that occasionally muddles the thrilling chase element but it never derails the action or entertainment factor.

Kudos must also be given to the actor playing Eddy Ko’s son who is far from the annoying shoe horned in kid moppet, as he proves just as effective at thwarting the bad guys as any of the mercenaries. Though I wouldn’t be surprised if the actor had to go through substabntial therapy considering what he has to endure during the film! He’s all part of the crazy entertainment that ‘Heroes Shed No Tears’ provides, a film from a bygone era of violent action. It might not be an essential Woo flick but one would be doing themselves an injustice in not checking out this early but highly entertaining action flick from the director.