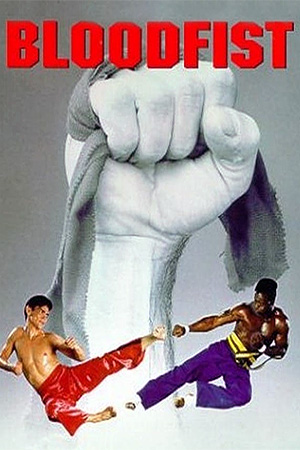 When retired kickboxer Jake Raye (Don Wilson) learns that his brother has been murdered in Manilla, he hops aboard the first available plane to ensure that justice is served. Unfortunately, the police are of little help, so Jake starts mingling with the locals to get some inside information. He soon learns that his brother was involved in an underground fighting tournament and it looks like one of the competitors was responsible for his death. Luckily Jake befriends a gambler and former fighter by the name of Kwong (Joe Mari Avellana) who offers to train him to compete. Will Jake manage to get his revenge or will he fall foul of the same fate as his brother?

Following the success of Jean-Claude Van Damme’s ‘Bloodsport’, a fresh batch of low budget martial arts actioners suddenly started cluttering up VHS shelves. One of the first to materialise was ‘Bloodfist’, a rather blatantly titled clone that clearly attempts to emulate a lot of the same beats. Considering the overall cheapness and primarily low-grade acting talent though, this winds up as a rather disappointing affair that relies heavily on the standard genre cliches – brother seeking justice, underground fighting tournament, training montages, quirky Asian teacher etc. That being said, if you’re a fan of 80’s trash cinema then you may still get a kick out of what it has to offer. Don “the Dragon” Wilson, making his leading man debut, is a fun if somewhat unspectacular hero and there are plenty of silly villains, hammy dialogue and unnecessary boob shots to keep you entertained.

When it comes to the action, ‘Bloodfist’ is definitely nothing to get excited about. Most of the choreography is basic to say the least, and it doesn’t exactly help that all of the fights seem to be shot in extreme close-ups. Wilson’s on-screen fighting is also a bit of a sticking point for me, as while he may be a kickboxing champion in real life, he just doesn’t seem to have a particularly large array of moves. Most of his confrontations seem to consist of the same few punches and kicks, none of which are all that impressive or well executed. Some of the other performers do fair a bit better, most notably Billy Blanks, but the majority of them have limited screen-time so barely register. All in all though, if you’ve seen any other American martial arts flicks from the era then you’ll pretty much know what to expect.

‘Bloodfist’ is clearly a very dated movie that lacks the polish and ingenuity needed to make a good martial arts movie. If however, you are a child of the 80s who spent many an hour browsing the shelves of Blockbuster looking for silly b-movie gems then this may still be worth a look.