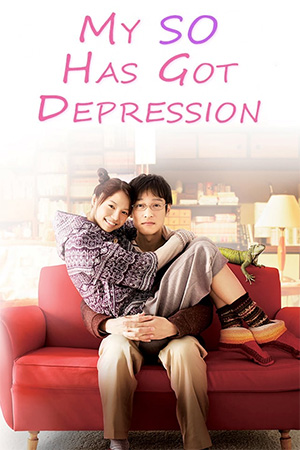 White collar worker Mikio (Sakai) finds himself overwhelmed by the day-today routine he finds himself stuck in. After being diagnosed with depression, Mikio thinks that his illness will be a short-term hiccup that will soon be cured. His manga-artist wife Haruko (Miyazaki) is not so sure and begins to take on more responsibility around the house in a bid to relieve the pressure from his shoulders. With only moderate progress in his mental illness, Haruko is now determined to support her ailing husband and sets out to ensure her work as an artist can support them both.

With such large portion of the world affected by some kind of mental illness, it’s surprising to see so few films dealing with it. When depression is tackled on the big screen it has the tendency to be shown as either a ‘quirk’ rather than a debilitating illness or melodramatic conceit. It is refreshing, therefore, that Japanese film ‘My S.O. Has Got Depression’ shows an ordinary person dealing with a misunderstood affliction.

Despite its clunky title, ‘My S.O. Has Got Depression’ handles the subject matter with sensitivity while never allowing Mikio to become a self-pitying protagonist. That said, the film doesn’t tackle the massive social stigma that still exists regarding the illness and mistakenly avoids showing Asia’s tendency to treat mental health as a weakness in character – Mikio is universally supported and is never confronted with the ‘Pull Yourself Together’ brigade that inevitably haunt those with chronic depression. Some genuine drama is missed by such an omission and belies the battle that sufferers face in being immediately judged by the ‘normal’ majority.

‘My S.O. Has Got Depression’ is still a very rewarding feature. Blessed with the presence of Aoi Miyazaki – possibly the cutest actress in the universe – the story of two ordinary people dealing with life-changing illness is uplifting without being glib, a skill that Japanese cinema is well furnished with. It may not prove to be the definitive film regarding depression – not that such a varied affliction could be pigeon-holed in just one way though – but it is a well acted drama with a welcome dose of positivity.