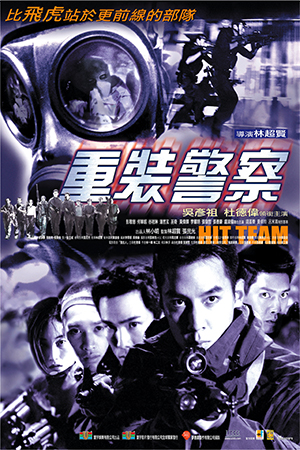 After the considerable success of the excellent off-kilter triad thriller ‘Jiang Hu – The Triad Zone’, director Dante Lam heads into the territory of the special operations action film. Lam had a previous brush with this sub-genre with his work on Option Zero, but here more is naturally expected of him. With the critics wowed by the way Dante Lam melded the typical triad drama with black comedy and surrealism in ‘Jiang Hu – The Triad Zone’, the anticipation was that ‘Hit Team’ would take the typical action film into a new direction. Therefore with this in mind, few quite knew what to expect from this new Dante Lam production.

The intriguing premise begins with a gangland deal which sees an undercover cop shot in the back. The wounds inflicted on him mean that he is partially paralysed and will be in this state permanently unless he is sent to Switzerland for a complicated piece of corrective surgery within the next three months. Any expected support from his superiors is sadly not forthcoming and instead of offering the needed help they distance themselves from the injury. When the close friends of the wounded party hear of this and realise the immense cost of the operation, they decide to put into use their S.D.U. training to act as latter day Robin Hoods. By plundering the illegal underground banks with their highly developed skills, the team hope to raise the necessary funds and send their colleague to Switzerland. However, during the first robbery the team are forced to kill all of the gangsters as they pose a threat as witnesses. This immediately alerts the police Hit Team who begin to try to unravel what had happened and work out how such a highly organised operation could suddenly turn sour. The Hit Team’s young superior officer (Wu) starts to link the robbery to a possible S.D.U. connection and slowly pieces together the reasons behind these drastic actions. What follows is a game of cat-and-mouse between the S.D.U. robbers and the police Hit Team with the city’s underground bankers also keeping an eye on the proceedings.

With such a strong film to follow, it was always going to be a considerable challenge for Dante Lam to know which direction to take. Perhaps admirably, Lam decides to go into a completely different direction and make a fairly straight-forward action-thriller. Unfortunately though, ‘Hit Team’ displays little of the innovation and skill that made ‘Jiang Hu – The Triad Zone’ such a critical hit last year. There’s no doubt that within the action genre there is room to work within and there are conventions that can be manipulated, but ‘Hit Team’ is merely a standard Hong Kong thriller with an interesting premise. The fault for this cannot immediately be placed onto Lam’s shoulders though as the necessary funding for what had the potential to be an explosive action film is certainly lacking. The film does contain some well-designed action with the film’s finale being the major showcase for this, but with a better budget to play with, ‘Hit Team’ could have offered much more to viewers. It’s also true that the premise is not expanded upon in the way that was demanded and therefore the opportunities are missed. On the positive side, the two lead performances of Daniel Wu and Alex To are confident and watchable with the supporting cast also offering the needed help in other roles. There is also the occasional stylistic touch which shows Lam’s growing skill in the director’s chair. In comparison to what ‘Hit Team’ could have been with a slightly bigger budget and a better realised narrative, this is a disappointment.