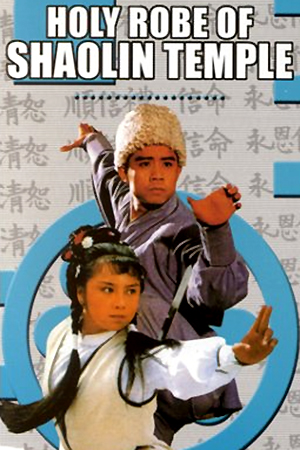 The Manchus have a vice-like grip on the Chinese people, but constantly face challenges from rebels throughout the land. The main opposers are housed at the Shaolin Temple and the Manchus therefore devise a scheme designed to pacify their enemies. Sending an undercover fighter disguised as an abbot, along with a considerable Manchu military presence, the rulers seek to install him as the new chief of Shaolin. The ensuing fight between the fake abbot and the resident master draws no obvious conclusions, therefore the formidable army is employed to quash Shaolin there and then. During the ongoing carnage, a group of monks manage to escape from the temple and are given the task of transporting an ancient relic – the ‘Holy Robe’ – to a distant place of worship. Knowing the symbolic power of this robe and the influence it wields, the Manchus send out a sizeable portion of their army to track it down. On the dangerous journey, the Shaolin warriors encounter their foes more than once and their numbers are soon cut down. However, they thankfully draw on a few useful allies, namely a young woman who had befriended one of the monks in a previous adventure. With her help and some close escapes, the Shaolin monks reach their goal, only to find the enemy there waiting for them.

Director Tsui Siu Ming has shown himself to be a film-maker with an eye for aesthetic strength. In films such as ‘Bury Me High’ and here with ‘Holy Robe Of Shaolin Temple’, Tsui creates a visually impressive environment in which the story unfolds. This is enhanced in this kung fu drama with ample use of stunning Chinese vistas and a definite attempt to develop an atmosphere in addition to the. This is just as well as the storyline is certainly nothing out of the ordinary; there’s very little desire to create anything fresh in this department. Therefore ‘Holy Robe Of Shaolin Temple’ is hindered by its pedestrian plotting and a lack of explanation for key plot points i.e. the significance of the Holy Robe. The action choreography is, strangely enough, another disappointment. There’s no doubt that the numerous fights are expertly performed and a few are genuinely exciting, but many succumb to an over-abundance of Wu Shu flips and jumps. A lack of solid kung fu fights means that the Wu Shu takes over; although there’s much to admire, the feeling is that the action becomes an exercise in acrobatics rather than excitement.

Away from its faults, ‘Holy Robe Of Shaolin Temple’ is a good kung fu flick that features Yu Rong Guang as the powerful villain. Though certainly not uncomfortable to sit through, there’s without a doubt something missing that stops it firing on all cylinders.