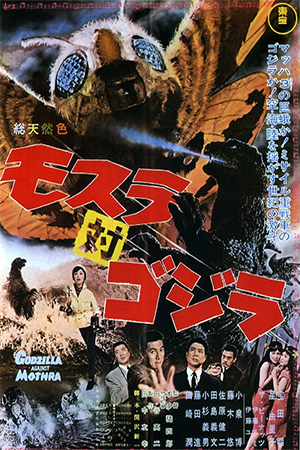 Ever wanted to see a giant moth fight a radioactive dinosaur? Then ‘Mothra Vs. Godzilla’ or as it was known in US threatres as ‘Godzilla Vs. The Thing’ is just the film for you. The story is fairly simple, a giant egg washes up on a beach after a great big typhoon and a local Del Boy type thinks he can cash in by hatching it and opening an amusement park around it. Two singing fairies appear and team up with some local do-gooders to try and wrest the egg from the business/yakuza types before it hatches and return it to its owner Mothra, a giant moth who lives on an island off Japan. Elsewhere Godzilla appears, in evil mode, drawn to the egg and begins smashing Japan, leaving the twins and their companions dependant on Mothra to defeat Godzilla after the Japanese army is shown yet again to be crap at fighting big monsters.

Meeting the later 70s entries and the earlier furrowed brow movies in the middle with a mix of both approaches, ‘Mothra Vs. Godzilla’ is regarded as one of the highpoints of the twenty odd movie series. It has a slight campy nature but has the message of the earlier films along with their high technical values and cinematography, mixed in with the menacing look of Godzilla after the previous couple of films less savage look. Here Godzilla is giant, reptilian with spiked ridges and looking as mean as a cider fuelled drunk at last orders. The confrontations with the military are excellent, involving napalm along with blazing electricity and the destruction of plenty of miniature sets. The FX are spectacular for a movie from the mid 60s, even the effects of the two fairies.

Ah the fairies, perhaps its a Japanese thing that’s lost on me but the characters seem to take these little people in their stride but perhaps you would in a world that includes Godzilla. Actually the strangest thing about the movie is a reporter who has a thing for boiled eggs, he is either eating them, looking for them or talking about them. It’s a strange quirk in the film that doesn’t really stand out but I’m assuming is humour lost in translation.

The monster battles themselves are what of course draw in the punters for Kaiju films and in this film they are well done indeed. Mothra makes an interesting opponent for Godzilla, using brains rather than sheer brawn, utilising wind and the landscape to try and defeat the Big G. The final battle with Mothra’s larvae racing in and out of caves, spraying silk to blind and bind Godzilla is a leftfield choice for me, but it works really well and makes for a nice final sequence.

Framing the monster clashes is a subtext of nature versus the advancement of man, especially in terms of expansion of industry and business. An interesting theme for a film from a country which in the early 1960s was getting that foothold on their way out of the postwar years and into the economic boom decades ahead. Till of course the bubble burst!

It is the contrast of the films title characters that make ‘Mothra Vs. Godzilla’ a nice stand out from the other films and I would certainly plump for this as a starting point for any newcomers. Well made, shot and performed, it is a classic of its genre.