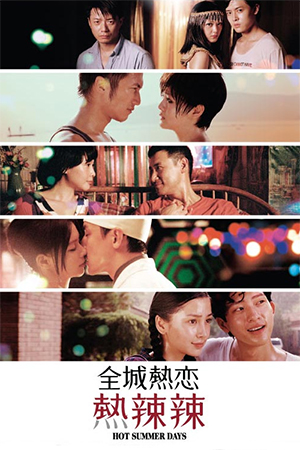 The first Chinese-language film to be produced by 20th Century Fox, ‘Hot Summer Days’ is a star-packed rom-com that weaves multiple plot threads into a rather delightful whole. Though the portmanteau nature of the story is a style fraught with difficulties and inconsistencies, writer/directors Tony Chan and Wing Shya seemed to have achieved an admirable equilibrium.

During a withering heat wave that has Hong Kong and the mainland at its mercy, a number of human dramas are played out. In the former, a single-father (Cheung) befriends a woman in Shenzhen (Liu) after they inadvertently begin to text one another. He yearns to provide a better life for his daughter while she is stuck in menial work despite her skills as a classical pianist. Across the city, a taciturn sushi chef (Wu) is reunited with the girl he secretly loves but nearly destroys their last chance to be together. While she plans to leave Hong Kong heartbroken, the chef tries to conquer his own inability to communicate and get her back.

In rural China, a village boy tries to win over the lovely girl who works at the local factory by standing outside her workplace for in the noonday sun for one hundred days, a challenge she gives him never thinking he will actually go through with it. In the capital, a photographer searches for a model who he deeply upset, hoping to make amends before potentially losing his sight forever. The various vignettes crossover constantly before the grand resolution.

A beautifully photographed film with an equally luscious cast does not necessarily a good film make. Yet ’Hot Summer Days’ is one of the more rewarding rom-coms of recent years despite its slick – some could argue superficial – appearance. Importantly, the writing is snappy enough to make the whole experience resonate well beyond any exterior gloss, leaving a lasting impression that the genre can struggle to achieve. It is predictable to a point (though there is a very ingenious twist near the end) and it is fully aware of its generic responsibilities, but it is executed with a confident panache.

In keeping with the title, each story is shot to emphasise the burning heat and the desperately sweaty protagonists (though of course the actresses glow rather than perspire). Tony Scott – a director who seems to set every one of his films in some roasting inferno that visibly saps the strength from the unfortunate inhabitants – would be proud. Even on a blustery autumnal day the intensity of ‘Hot Summer Days’ look had me throwing on the Factor 6 with complete disregard. And anyone who has walked through the streets of Hong Kong in late August will know just how every one of the characters feels.

‘Hot Summer Days’ manages the feat that so many productions using multiple stories flatly fail with, namely making each of the plot strands interesting rather than just using a few as killers and the rest as fillers. There are stories that are particularly memorable – the Jacky Cheung/Rene Liu episode is especially sweet – but even the one that could be seen as the weakest (relatively speaking) is never a chore to sit through. Each little romantic thread is well written enough to develop with a proper narrative instead of just plonking good-looking stars in front of a lens and seeing what happens. Kudos for Chan and Shya, hope for everyone else that Hong Kong cinema has two new film-makers to admire.