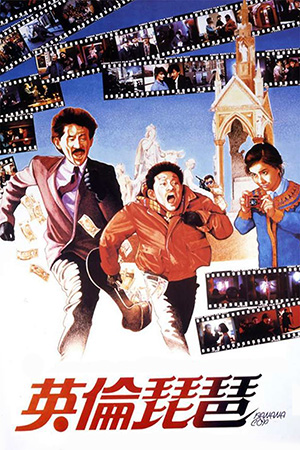 The popular teaming of George Lam and Teddy Robin were given another big screen feature with this early-80s comedy thriller. However, the big difference with this feature and the films like ‘All The Wrong Clues’ is not only its movement away from madcap farce, but also its unusual London setting.

When two men are killed in London’s Chinatown, the local police are faced with a host of witnesses who refuse to talk. Anglo-Chinese police inspector Yau (Lam) manages to coax some information out of the community about the crime and discovers that Hong Kong criminal ‘Ping Pong Ball’ (Robin) may have been inadvertently involved. Yau travels to Hong Kong to organise the release of the convict, though he eventually has to trick ‘Ping Pong Ball’ into helping out Scotland Yard with the case. With the prospect of facing a severe beating from his rivals in a Hong Kong prison, ‘Ping Pong Ball’ risks his life by returning to London to help with the case even though his previous visit had helped him acquire a number of enemies. Yau and ‘Ping Pong Ball’ begin their investigations by looking into the dealings of a shady Chinatown businessman, but the shifty informer decides to escape from Yau and manages to find shelter with a blind teacher (Chung). As ‘Ping Pong Ball’ plans his next move and Yau searches London for him, the killer begins to target the both of them.

I had read a few very positive reviews of this film during its appearance at the London Film Festival over a decade ago and some less positive ones since, and so I was quite unsure as to what faced me with this early ‘Cinema City’ hit. Encouragingly for me, ‘Banana Cop’ is a success for the majority of its duration and, even in its weaker moments, doesn’t let the viewer down too dramatically. With a profitable fusion of Hong Kong cinema’s energy and unpredictability with a gritty, yet always fascinating London location, ‘Banana Cop’ manages to be fresh despite some plot-holes.

The buddy movie was already well used even by the time this relatively early entry into the sub-genre was released, but the lead pairing has the advantage of experience together as well as two strongly written characters. Though backgrounds of both characters are sacrificed, the cultural and social differences between the two help to flesh out their personas. George Lam gives one of his best performances as Inspector Yeh, managing to be typically stoic (a feature that has often condemned him in other films) while also showing some emotional depth. It’s little surprise that Teddy Robin is such an able sidekick – not only had his own screen personality been well documented before this, but he was also one of the few actors who could boast a real chemistry with George Lam. Although the two are as different as is expected of these ‘buddy’ films, the difference here is that, even towards the end, their relationship is ambiguous. Even a potentially unenviable role for Cherie Chung is given enough value by director Po Chih-Leong.

Po Chih-Leong has shown himself to be a director who can weld together Eastern and Western elements in subsequent features. ‘Banana Cop’ is an early example of how the two diverse cultures can compliment each other if a skilled film-maker is at the helm. Though a few of the background characters are a bit too ‘cor, blimey guv’nor’ at times, they are still light years ahead of many Hong Kong portrayals of Westerners. ‘Banana Cop’ is a quick-moving film that is at times amusing and at times, thanks to some fine direction, suspense-filled. Well worth watching and a pleasant change from the norm.