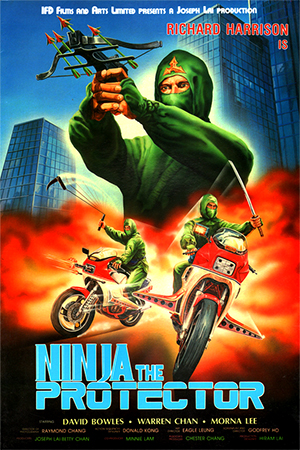 When forged U.S. banknotes start to make their way out of Hong Kong, a special international unit is set up to locate the source. Headed up by Jason Hart (Harrison), who also happens to be a highly trained Ninja, the group soon identifies several individuals that they believe are in charge of the operation. Undercover police agent Warren Lee is infiltrated into the gang in an attempt to keep track of their movements, but he soon gets caught up in a love triangle that is doomed to go horribly wrong. After much bloody violence and double crossing, the final confrontation draws near and Hart will need all of his Ninja skills if he is to defeat the head of the forgery gang.

If you were able to extract just the Richard Harrison elements from ‘Ninja The Protector’, it could actually prove to be a pretty entertaining outing. Obviously it would still be a cheesy Ninja outing, but it would definitely be a much more watchable affair that would consist of Harrison strutting his usual funky stuff and the standard 101 laughable clichés. Sadly though, as is often the case with IFD productions, it’s the spliced in second feature that generally makes this more of a chore than a pleasure to watch. On this occasion it appears to be some kind of relationship themed drama, so it doesn’t really fit in all that well with the main story and just seems to revolve around a guy who likes to sleep around. Of course this does mean it regularly strays into softcore porn territory, but even this is badly done as the camera likes to focus on the strangest areas, such as kneecaps or armpits.

Unsurprisingly, the action in ‘Ninja The Protector’ revolves primarily around your stereotypical Ninja antics, with teleportation, smoke screens and throwing stars all on display. To be honest there really isn’t much that stands out in the way of choreography, but they are still amusing in a clichéd way and feature some inventive ideas like duelling whilst riding motorbikes. As with the story though, it’s the so-called fights found in the secondary scenario that really let the side down. The majority of these encounters come across like kids play-fighting and the combatants just seem to push each other around for a few minutes before someone eventually falls over.

‘Ninja The Protector’ definitely contains some classic Richard Harrison moments, but unfortunately they are severely hampered by the tacked on undercover cop story. However, if you have a strong stomach for bad cinema or are just a sucker for films from the IFD era then it may well be worth adding to your collection.