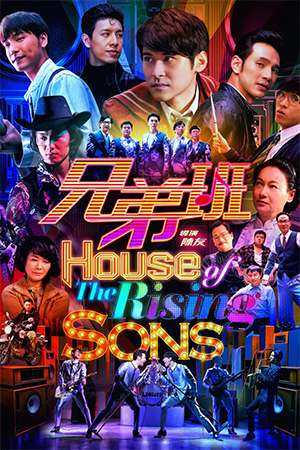 Along with Samuel Hui, his band Lotus and 60s pioneers ‘Roman and the Four Steps’, ‘The Wynners’ are probably the most influential musical group in the formation of Cantopop (though they often sung in English). Every country, culture and generation have their teen idols and so familiarity with that little bit of trivia doesn’t necessarily preclude the uninitiated from enjoying this bright and breezy biopic.

During the tumultuous later years of the 1960s, a group of friends decide to form a band. They face opposition from parents, opposition from the neighbourhood (who cannot stand their boisterously loud rehearsals in the street) and a general lack of skill in playing their instruments to get a group together. Initially formed to impress the girls, the group begin to take their task more seriously and, under the emergency name ‘The Loosers’, succeed in a nationwide musical competition. Yet it is only in the mid-1970s that they find a voice of their own and, having had to fight their respective family’s expectations, look to make it in the cut-throat world of music. Eventually, after working in clubs and bars, ‘The Wynners’ are born and success begins to come their way. Yet jealously between the members – mostly stoked by selfish advisors and reporters – means that the fun might not last that long.

‘House of the Rising Sons’ is an enjoyable biopic that acts as an interesting chronicle of Hong Kong in the late 60s and 70s. Though ‘The Wynners’ have never had the tempestuous history that certain rock groups have had, there’s enough friendships, break-ups and reunions to satisfy the genre fan. While Hollywood biopics tend to be a means for actors, actresses and directors to act like mendicant Award-grabbers, this is a much lighter toned film without the darker aspects that make recent hits so popular. Nevertheless, it’s a solid study of the strains that sudden fame has on friendship, especially when the screaming girls and management team are favouring two members over the whole five.

If there was one major flaw in this film it would be in its pacing. Too much time is spent on the band’s formative years and especially the members’ hi-jinks during their birth. The friendships aren’t as well-written as they should be considering the amount of time spent building this foundation and when the more interesting, more layered section dealing with the band’s fame comes in, it is a thankful transition. Yet too little time is spent between their signing to their going their separate ways; the tensions are obvious, but would have benefited from a much more delicate hand. The outside pressures that impinge on the group needed greater exploration for this to resonate beyond the television movie staple.

‘House of the Rising Sons’ is a diverting production with enough charm to keep it going throughout its duration. Whether it ever fascinates the way the best biopics do might hinge on your love of ‘The Wynners’. A meditation on friendship rather than the excess of superstardom, it is inoffensive, perhaps even heart-warming on occasion, but there’s not quite enough within the story to make it especially memorable.