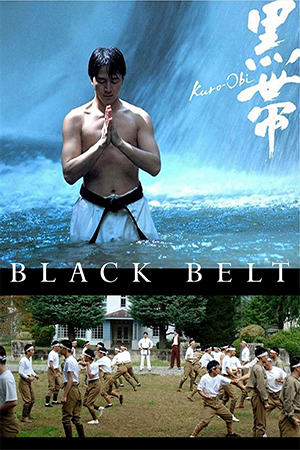 In direct opposition to the current trends of martial arts cinema – where extravagance has reached ever-more incredible levels – Shunichi Nagasaki’s ‘Black Belt’ proclaimed the tagline “Real Fight, Real Karate, Real Japan”. Featuring real exponents of Karate rather than the usual doubling of popular actors, ‘Black Belt’ is a very modern, very Japanese take on one of the oldest clichés the genre has to offer i.e. the division between two students who follow different paths in life. ‘Black Belt’, though, is an exercise in taking familiar material and giving it a stylised twist.

As Japanese forces invade Manchuria and close in on other territories in Asia, an isolated Karate dojo in the middle of the Japan’s hinterland continues to devote itself to intense practice with little interest in secular matters. The sensei brings up his three students as his adopted sons, despite their obvious differences in personality. Taikan (Tatsuya Naka) considers himself the leader in terms of ability and knowledge though his burning agression brings him into conflict with his sensei. Meek Giryu (Yagi) has the necessary skills, but cannot adopt the single-mindedness of his older student. The middle student, Choei (Suzuki), is caught between the two extremes though he tends to follow Taikan despite not agreeing completely with his path. Their uneasy alliance is disturbed when the Japanese Military Police march into the area to commandeer the dojo and press-gang the students into service. Taikan’s power forces the aggressors away while Giryu defeats their sergeant in a duel, but will not carry out his last wish of ending his dishonoured life.

Before the re-enforcements arrive to avenge their sergeant’s defeat, the sensei dies and bequeaths the school’s famed black belt to the student who will prove himself worthy. Taikan immediately sees himself as the rightful owner of the belt while the now-injured Choei decides to make the final decision between the two. Events spiral out of their control when the troops arrive and Giryu is attacked by the vengeance-seeking children of the sergeant who subsequently committed suicide after the shame of his defeat. Giryu has little interest in fighting back and is thrown from a cliff, therefore presumed dead. Taikan takes his impressive abilities and becomes the instructor of the army, gradually leaving the uprightness of his earlier years in favour of money, women and alcohol. A megalomaniacal Taikan begins to relish the power he has and, with the help of his direct superior, closes down every dojo in the area through force. Yet Giryu is still alive and has been nursed back to health by a widowed father and his two children. Giryu has lost interest in Karate, noting the destruction it previously bought those around him. Though they have chosen very ways of living in very different environments, Giryu and Taikan are destined to meet again.

Everything about Shunichi Nagasaki’s film is direct and free of any unnecessary burden. Its settings, its cinematography and its soundtrack are all devoted to simplicity and cut away the usual trappings of modern action cinema. All of this parsimony is most obviously reflected by, and is symbolic of, the brutal intransigence of the Karate in the film, impressively realistic and lacking in needless trickery. Masato Kaneko’s cinematography is key to this style of effective simplicity; the camera remains still, not prone to quick-cuts or distracting angles and used with the sole purpose of letting all of that delicately created atmosphere into the frame.

The storyline is predictable and an obvious staple of the genre. From the opening shots to the closing, discoloured finale, every twist is easy to telegraph and each scene gives off a strong sense of deja-vu. Yet ‘Black Belt’ is always aware of its heritage and its familiarity, choosing to use these aspects to its advantage. I’ve always been of the opinion that even a clichéd narrative can be absorbing in the hands of a director who understands its mechanics and has enough aptitude to divert attention away from its predictability. For the most part, Shunichi Nagasaki succeeds and ‘Black Belt’ proves to be involving despite its strick adherence to generic conventions. It rarely stirs us emotionally, favouring stoic characters with pensive expressions forever etched onto their faces, yet there is much for to engage a variety of cinephiles.

‘Black Belt’ builds up each of its fight scenes by cranking up the tension every bit as effectively as the old chanbara films it stylistically mimics. Short, sharp blows are delivered with ruthless precision and every attempt is made to distance itself from its contemporaries with regards choreography. Simple it might appear, but its effect should not be underestimated as it beautifully mirrors the emotions of the characters who use each move. Taikan is focused, intense and unsentimental, aspects shown in the way he defeats opponents while Giryu is more thoughtful and reticent, the natural antithesis to his rival. Neither actor is stretched in these roles, yet less is certainly more when it comes to the seething emotion they continually repress.

Every decade or so, one film tends to shake the genre up and numerous imitators spew forth shortly after. ‘Black Belt’ could well be a cult hit that influences those who follow it. It is not a flawless masterpiece, but its differences – as well as its similarities – make it a work that is worthy of its popularity.