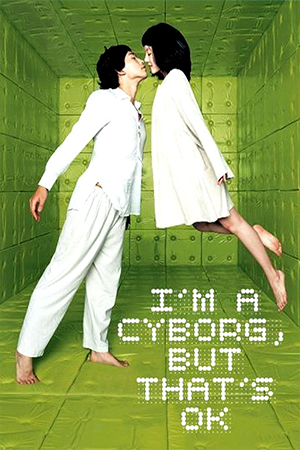 Park Chan-Wook goes all quirky, stylish and experimental in his follow up to his hugely successful and influential Vengeance trilogy (‘Sympathy For Mr. Vengeance’, ‘Lady Vengeance’, ‘Oldboy’). Perhaps a little too quirky and experimental as while ‘I’m A Cyborg, But That’s OK’ is certainly original and shows Chan-Wook has talent outside the bloody revenge genre, this departure is just a little too quirky for its own good.

Cha Young-goon (Lim Soo-Jung) is a confused young woman who after a failed and seemingly misguided suicide attempt ends up in a mental institute. Not only did she attempt suicide but she also believes she is a military combat cyborg. So much so, she only talks to other machines and inanimate objects (vending machines, lights) when first entering the institution. However, her disconnection from other people soon begins too dissolve when she strikes up an unlikely friendship with another patient, Park Il-sun (Rain). Taking to wearing bunny masks, hopping around the institute like a frog and believing he can steal other people’s souls, Park Il-sun soon begins to bring Cha Young-goon out of her cyborg shell and, somewhat, back into the real world as the two develop an unlikely but touching bond with one another. But love and life is hard to maintain and understand when surrounded by many people far removed from reality and when you yourself may be just too far gone into your own psychosis.

Ultimately about two lonely people finding love, or at least finding some one to care about, ‘I’m A Cyborg, But That’s OK’ certainly works as a tale of two lost souls connecting with one another. The two leads are exceptionally good, Rain showing he is more than just a J-pop star and Lim Soo-Jung bringing an undeniable sweetness to her damaged character. They also get good support from an array of supporting characters and fellow inmates who include a compulsive liar, a man who only walks backwards and a woman who has a magical pair of socks that she believes can make her fly. Perhaps the most striking element is the visual design and camerawork. Park Chan-Wook certainly sets ‘I’m A Cyborg, But That’s OK’ apart from his previous darker work, a vivid colour design and a free flowing camera adding to the skewed reality the characters find themselves living in.

Unfortunately for all its great design and acting, ‘I’m A Cyborg, But That’s OK’ just fails to connect. This is perhaps the point as it is about characters unable to connect with those and the world around them. But the over abundance of quirkiness and zaniness becomes rather tiresome after a while. It’s certainly played well but just laid on a bit thick, as if  Park is trying a little too hard to separate this from his previous work. The gentle romance between the two leads is certainly sweetly played and while the film doesn’t necessarily have to provide explanations for why the people are the way they are or give some kind of resolution to their problems, the film just lacks a certain something (an emotional core maybe) that would set it above just a case of a director stretching his stylistic talents. Plus, it isn’t all silly comedy and quirky styling as Park can’t resist throwing in a bit of his trademark grittiness as well: electric shock therapy, Cha Young-Goon refusing to eat which in turn leads to hallucinations of her gunning down the entire facility in combat cyborg mode.

By no means a disaster but a frustratingly mixed bag from a usually consistent and exciting filmmaker. Certainly good to see Park trying something different and yes it is a million miles away from ‘Oldboy’, but ‘I’m A Cyborg, But That’s OK’ just doesn’t gel as a whole to be a fully satisfying experiment and film experience.