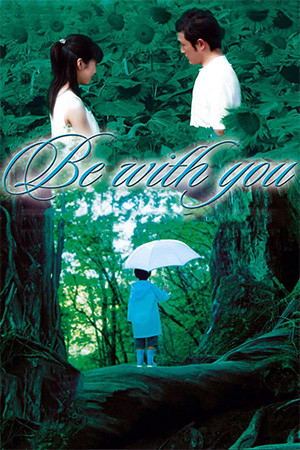 Young widower Takumi and his six year old son Yuji find life difficult to cope with following the death of Mio, their wife and mother respectively. Takumi keeps his sons spirits up by reminding him of Mio’s promise to return in the rainy season to see them and the young clerk even begins to convince himself that something magical may happen. When the rains come and a section of Japan is deluged, Takumi and Mio head to one of their favourite haunts to remember the woman they loved. Remarkably, a woman who looks exactly like Mio is discovered there, completely unaware of her identity and history. Takumi is convinced that this doppelgänger is his beloved and tells her so, inviting her to re-acquaint herself with husband and son. At first the stranger is bewildered by the claims but begins to warm to her new family and becomes a mother to Yuji. Meanwhile Takumi tells her of their first meeting and the love they had before is slowly being rekindled during the rainy season. The mystery woman pieces together what could have been her previous life, but realises that, with the rainy season soon to end, she may not have much longer to uncover the truth about her arrival.

Nobuhiro Doi’s hit romantic drama cast quite a spell over Asia during its release, so much so that it has now been added to the ever-moving conveyor belt of future Hollywood remakes. Whether or not it will be a typically anaemic attempt to catch Asian lightning in a big-budget bottle is questionable, yet the challenge of stirring the soul as ‘Be With You’ undoubtedly does will take an uncharacteristically deft touch by those given the task. ‘Be With You’ tackles the subjects of mortality and love without becoming insipid or cloying, no mean feat when discussing themes that often prove to be sourced by cobbled-together t.v. movies.

It’s almost a brave move to make an intelligent paean to lost love and innocence. Too often, what is seen as ‘intellectual cinema’ portrays love and human relationships as some angst-ridden, morality free maelstrom of bourgeois melodrama. ‘Be with You’ isn’t a Tarkovsky musing on spirituality, but it still engages the brain as well as the emotions. It takes its time setting up the story, throwing pieces of information into the narrative after the characters themselves are firmly developed. Nobuhiro Doi puts the needed exposition into the beginning of the work, yet much of the films power is emitted in later scenes when certain actions are fully explained. This keeps the 120 minute duration consistent and constantly engaging, carefully constructed to keep us intrigued throughout.

‘Be With You’ benefits from the location used for the main story. Viewers are familiar with Tokyo as a setting, but here the film-makers have centred the action in a more rural setting giving the drama an ethereal quality. The concept is effective because there is something inherently mysterious about the surroundings and Nobuhiro Doi exploits it to add to the overall gravitas. Though never threatening or encroaching, the forest that surrounds Takumi’s home gradually becomes a character in the film and links the two realities used in the story. Director Doi also has the advantage of a cast who look realistic in their parts rather than just movie stars awkwardly masquerading. Importantly, while Nakamura and Takeuchi carry the weight of the story with two very affectionate performances, Akashi Takei proves to be more than just a saccharine-coated child actor dropped into scenes for the ‘aaahhh’ factor. Yuji is an important part of the story and his moments are touching, yet never maudlin.

‘Be With You’ is a Japanese drama that is easy to appreciate on the surface as it is a well-made, well-acted work that skilfully tells a story without ever getting side-tracked in needless sub-plots. Yet underneath the simple idea is a powerful contemplation on appreciating those around us while they are still there. This theme is particularly well presented, lingering throughout the duration and long after the poignant denouement. It’s certainly worth two hours of anyone’s time – it’s a recommended feature on an often miss-handled subject.