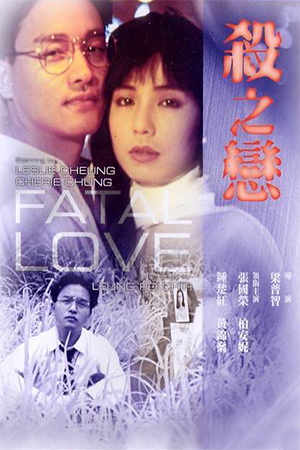 It stars the late Leslie Cheung as a hair brained Chi Ken Wing, or “Chicken” Wing (hoho!) to his friends, who meets a mysterious woman played by Cherie Chung whilst driving late at night. Initially offering her a lift, her presence is short-lived and he soon finds himself questioning if she were real or a wayward ghost. After smooching ‘ol Chicken, the ghost lady disappears along with Mr Wing’s jacket. Haunted by the experience, ‘ol Wing spends his days doodling at work and chasing phantoms down busy Hong Kong streets, finding his jacket on a grave stone with the gal’s face on it and all sorts. That is until a chance encounter on a busy street provides the revelation that his gal indeed flesh and blood and not a ghost. YOWZER! There endeth the ghost plotline, instead she also turns out to be the mistress of a mobster called Sam Tsao, played by Melvin Wong. Sam is a dubious Scarface type with a big moustache and a line in dodgy white suits. ‘Ol Wing has to have his girl and dogs her every move until he manages to get his old man out and promptly they profess complete devotion to one another.

From here the film veers from stylish ghost yarn to a doomed Mills N’ Boon tragedy with added Hong Kong grit. You know by the end it’s not going to end happily, the music (cheapo warbly synths) is morose and the camera lingers long and hard on sad faces. Yet there’s something extremely likeable about ‘Fatal Love’ for all it’s typicality in terms of story genre-wise and sheer soap opera shenanigans.

The film looks good, all primary colours and plush, with plenty of panning cameras and inventive shots. It’s typical of Cinema City’s output, a cut above most HK film studios in terms of cinematic flair. The acting is good too, I especially dug Melvin Wong’s mad gangster. It’s either his moustache or muscular torso. Mmm Melvin.