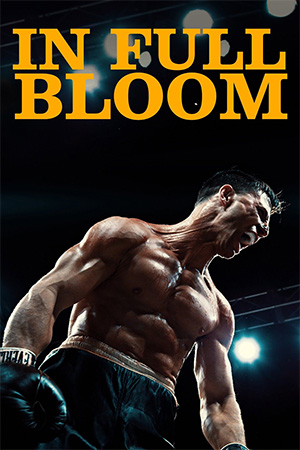 In a tension-filled post-WWII Japan, undefeated boxing champion Masahiro awaits the fight of his life. In the opposite corner is former American champion Clint Sullivan, a fighter who has fallen on hard times and has now been persuaded to go to Japan for redemption. While both men share barbs at the press conference, they also reflect on their respective journey to this point; Clint recalls his fall from grace and experiences of the war while Masahiro contemplates his special training regime. Yet behind both men are different expectations threatening to overwhelm them and with the Yakuza taking an interest in the bout, nothing will be straight-forward.

‘In Full Bloom’ is the classic story of a duel, transported to the 20th century and utilising a post-war environment for extra depth. And it nearly succeeds in being soulful, meditative and thought-provoking – at least for the first half. Over its full running time of a modest ninety minutes, ‘In Full Bloom’ runs out of steam and the attempt at deeper layers of introspection become stilted.

The film starts well with both characters being carefully defined while the backdrop is fleshed out. There’s the classic story of redemption mixed with the Rocky-style training and the idea of two different worlds clashing. Yet for all of the promise, ‘In Full Bloom’ becomes self-indulgent, bloated by those slow-motion scenes and moments of deadly earnest narration uttered over characters looking thoughtfully into the middle distance. It becomes an exercise in what the makers think signifies depth rather than what does; just having characters say vaguely philosophical things as they muse on life does not necessarily translate to a fascinating film.

One thing to mention is that ‘In Full Bloom’ is very well shot and solidly acted by the relatively unknown cast. Yet the actual body of the film is lacking; there are hints at Clint’s war trauma, but it is never really delved into and this proves to be a missed opportunity. It never quite lives up to early promise and this is the over-riding memory when the credits roll.