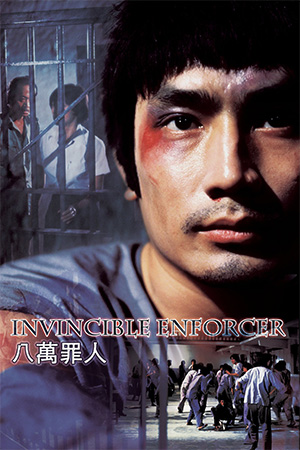 Manual labourer Jiang Chai (Lau Wing) is an honest and hard-working man, with an attractive wife in Xia Lin (Helen Poon) and news of a child on the way, but he also holds an inordinate sense of justice that is his weakness. When bigoted local Police Inspector Wang (Antonio Ho) tries to pin a robbery on his co-worker, and ex-convict, Bao San (Lam Fai-Wong), Chai stands up as Bao’s alibi. Tarring Chai with the same brush as his co-worker, Wang goads him into an altercation that delivers the expectant father the shock of a twenty-month prison sentence. Once inside, Chai finds his own resilient, but honourable, spirit at odds with both the division chief, Brother Long (Wong Yung), and Wang’s prison warder cousin, Ho (Chan Shen).

His decision to walk his own path and not fall under the wing of Long sees him almost killed in a brutal bashing, then subjected to ongoing torture and degradation. Cell buddy Xin Gui (Ngaai Fei) sets him up under the guise of a fabricated escape bid, which ends with Chai locked in solitary confinement. Every which way he turns, the odds are unanimously against Jiang Chai. By good fortune he befriends social worker and parole officer Lin (Fan Lei), who takes his claims of human rights abuses and official corruption extremely seriously. Determined to have his vengeance on Wang for turning his life upside down, little is Chai aware just how far reaching the inspector’s stranglehold is or the ends he’ll go to to crush him like the blight on society that he is convinced Chai and his fellow inmates are.

Predating Ringo Lam’s ‘Prison on Fire’ (1987) by almost a decade, Cheng Kang’s ‘Invincible Enforcer’ (1979) can be seen as the progenitor of the Hong Kong prison drama, albeit a progenitor with considerable flaws that have possibly seen it overshadowed by its more widely known successor. Primarily known as the father of modern day action choreography wizard Tony Ching Siu Tung, Cheng himself is possessive of an extensive background in cinema that stretches all the way back to the fifties, notably rising to fame as a screenwriter throughout the sixties. Before making his directorial debut for the Shaw studios with ‘Gun Brothers’ (1968), Chang had been responsible for writing some of their best-known works of the era including ‘Sons of Good Earth’ (1965) and ‘The Monkey Goes West’ (1966).

During his tenure as director some of his more notable works included ‘The Sword of Swords’ (1968), ‘The 14 Amazons’ (1972) (co-directed with Tung Hsiao Yung), true-crime thriller ‘Kidnap’ (1974) and entertainment escort exposé ‘Call Girls’ (1997). With a breadth of screenwriting experience, and success across multiple genres, Cheng would openly appear the most apt director to bring a gritty tale of criminal injustice and human drama to the big screen. However, what effectively brings ‘Invincible Enforcer’s lofty ideals down about its head is its script by Hsin Han-Pai, which takes the stock-standard martial arts revenge plot and attempts to graft it onto a contemporary social commentary piece. To say that the amalgamation of the differing genres doesn’t come together, or in fact work, would be an understatement. The core revenge motif clashes spectacularly with the many messages and themes that surround it, so much so that it virtually ends up minimising and/or negating almost every critical point the film strives to raise.

Key to this colossal scripting blunder is Lau Wing’s character of Jiang Chai, who is centralised as a forthright and moral man who is served injustice after injustice and wronged by virtually every individual he meets, barring Fan Lei’s parole officer Lin. His principle driving force then becomes gaining revenge on those that marginalised him the worst. Being that Lin is painted as fiercely law abiding, as well as operating directly within the jurisdiction of Crown Colony law in terms of anti-corruption and human rights, it comes over as completely implausible that she would bend so conveniently to Jiang Chai’s will to collude with him to expedite his revenge. In fact, apart from his mother-in-law (Ouyang Shafei) and wife, all parties sympathetic to Chai’s plight seem only too willing to transgress the law to help him achieve his deep-rooted ends (Lam Fai-Wong’s Bao San breaks his parole so that he might end up back in prison to assist Chai in bringing down corrupt warder Chan Shen)

Although desperate to sell itself as a study of what creates criminal behaviour and how rehabilitation can only occur in the parole process outside of social prejudices and pressures, ‘Invincible Enforcer’ instead chooses to play its revenge element as its focal conceit. And that, unfortunately, proves to be its greatest error of (mis)judgement. Throughout the entire narrative arc, and hardships Jiang Chia endures, the audience is never once sufficiently distanced from his drive to right the wrongs he has been subject. Whilst Chan Shen and Wong Yung are entirely slimy and cunning in their roles, they end up being mere ciphers as the physical representation of corruption and intimidation; the violence and degradation Lau is subject metaphors for larger issues – negated through his character’s unwillingness to reform over serving the vigilante justice he feels his antagonists deserve.

This is not to say that the film is without its merits, or memorable moments for that matter, as there is much compassion generated by Cheng within Jiang Chai’s character, against his vengeful persona, and the viewer is afforded some heartfelt drama once he achieves parole as he tries to reassimilate into a daily routine amongst a society only too willing to judge him on his prison background. There is also a melodramatic sub-plot introduced late in the piece concerning Lin’s ex-con father (Chen Kuan-Tai) and his downtrodden existence as well as their failed efforts to reconnect. Within the prison-grounds, the rudimentary shock machine comes into play, with stomach-turning focuses on faecal matter and the harsh realities that (often brutal) violence forms in prison life. Thankfully, perhaps due to the era and criminalisation of the act, homosexuality and prison rape are wholly absent (these aspects of prison routine would creep into later works such as Hugo Ng’s ‘Jail of No Return’, 1994, and Wong Jing’s ‘Wise Guys Never Die’, 2006, to name a purposeful few).

Often cited in reference works as a martial arts film (arguably by those that have never seen it), ‘Invincible Enforcer’ is a work that effectively proves a tough recommendation. From a historical standpoint, it is worth seeking out as the progenitor of the contemporary Hong Kong prison drama and early template for ‘Prison on Fire’. On the other hand, as either social commentary or message movie (even political thriller) it fails because of its revenge-thriller structure; whilst preaching anti-corruption, human rights and parolee reform the willingness of its protagonist to break the law to gain justice cancels out whatever moralistic message it is trying to convey. As a morality play, it nearly makes the grade, being that the unexpected (and shocking) finale hammers home the adage that crime doesn’t pay in such bloodthirsty fashion it’s almost excessive. Ultimately, ‘Invincible Enforcer’ proves such a hit or miss affair that it’s not hard to see why it has remained virtually unknown to international audiences since its release; though the filmmakers’ intentions were obviously well-meaning, their resultant significance is all but lost in translation.