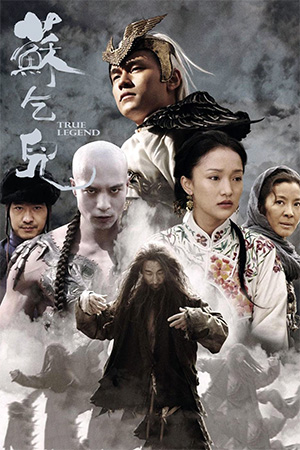 Yuen Woo-Ping returns to the director’s chair after an absence of almost fifteen years, and brings with him actor Vincent Zhao who is also making a welcome return to the big screen.

Zhao plays Su Can (Beggar So), a Qing court warrior who leads the rescue of a prince from the hands of his captors, the leader of whom is played by Cung Le.  After the successful rescue Su decides that he wants to give up this life and passes on his promotion and recognition to his adopted brother Yuan (Andy On).

Five years later, Su has settled down with Yuan’s sister Ying (Zhou Xun), and the two live happily with their son. Things take a turn for the worse though when Yuan returns and decides to take revenge on his adopted father. Having studied the Five Venoms Fist technique, Yuan is now too powerful to control and he takes Su’s son and dispatches Su’s body into a river as Ying dives in to save him.  Here we’re introduced to the medicine healer (Michelle Yeoh), who manages to keep Su alive although at the cost of losing his kung fu.  He now starts to drink heavily and attempts to regain his skills by developing the Drunken Fist with the aid of the God of Wu Shu (Jay Chou) and a brief appearance from Gordon Liu. Will Su be able to master the martial arts style he is developing as well as seek revenge on Yuan?  Well, you’ll just have to watch it and find out.

Let’s start by saying that the cinematography in ‘True Legend’ is lavish and beautiful to the eye. There was certainly some real thought put into where to film the scenes of Su recovering in the mountain retreat and it has really paid off.  The cast is also strong and it’s a welcome return to form for Vincent Zhao, who really knows how to bust a few moves and holds true to the Drunken Fist style, even if he does overcook it a little to allow the audience to be entertained.  Zhou Xun looks pretty but her character is never fleshed out while Michelle Yeoh and Gordon Liu are woefully underused.

The real highlight here though is the action, with Yuen Woo Ping bringing old school fused with new school kung fu, which is a real treat. The Drunken Fist style oozes out of each frame as Vincent Zhao handles himself well against many foes, including Conan Stevens and the Russian thugs led by David Carradine in one of his final films.  This leads us to what can only be described as the tacked on part. As the first two thirds of the film deal with the evolution of Beggar Su and how he came to develop the Drunken Fist style, the final third just doesn’t seem to fit even if it is where Beggar Su shows off his new Martial Art style.

‘True Legend’ may have a few flaws but it has more in its favour than against. Action fans in particular will find much to appreciate here, especially the chance to see the Drunken style so excellently represented on screen. So grab yourself a bucket of popcorn and a bottle of wine and sit back and enjoy another flurry of feet and fists at the hands of the masterful Yuen Woo-Ping.