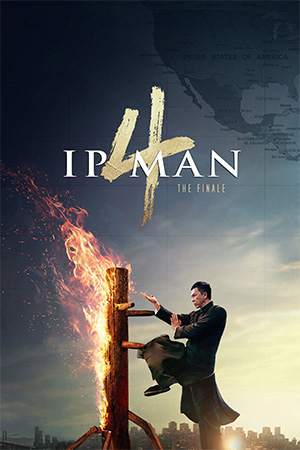 Donnie Yen returns once again as the legendary Ip Man for one final fling (save for any prequels or spin offs!). In this instalment, we join Ip Man later in life as he contends with old age, his troublesome teenage son and a diagnosis of cancer which will eventually claim his life. This time around, Ip travels to the US at the invitation of Bruce Lee to see his former student take part in a karate tournament and look for a possible place of education for his wayward son. Struggling with ill health, Ip also comes up against the Chinese Benevolent Association who are displeased with Ip’s teaching Chinese martial arts to Westerners. He also faces hostility from a nearby army base when a radical drill sergeant (Adkins) takes a disliking to Ip encouraging an Asian American soldier (Vanness) to introduce Chinese kung fu as a form of US military hand-to-hand combat. Soon, Ip Man finds himself fighting prejudice, discovers the US is not the land of opportunity he was led to believe and resolves to take up the fight for those who are being persecuted.

This fourth go around for Yen and director Yip with the Ip saga is as solid as ever from the duo but pales in comparison to the first two instalments and various creative choices hinder it from it being great rather than just good. Any franchise can suffer from fourth instalment fatigue and that’s perhaps what is happening here. The blending of fact and fiction (which was often what made the ‘Ip Man’ films so entertaining) perhaps leans more towards fiction here (Bruce Lee featuring more heavily in Ip’s life than it has been suggested!) and with a wealth of new characters (both good and evil) means Ip sometimes feels like a guest star in his own movie. Maybe this was a creative choice to play to the fact that Ip is quite elderly here when we join him in the 1960s, meaning he’s saving all his energy for the fight blowout come the finale. The film also deals with racism, Ip experiencing it from almost every American character he meets, along with hostility from his own Chinese brethren. It’s a serious subject matter that needs highlighting and was rife at the time the film is set (not to mention still today, unfortunately!) but is often dealt with in a very heavy-handed manner, meaning it loses some of its dramatic punch.

Still, it’s good to see the subject matter being broached and it doesn’t derail proceedings completely. Yen is still great as the quietly commanding Ip, the film benefits from a classy pace meaning the narrative builds to all the kick ass fighting and speaking of fighting, this entry still delivers the fantastic fights scenes the franchise is known for. Yuen Woo-Ping is on hand to choreograph and while all the fights are mainly one-on-one (no Ip taking on rooms full of goons this time around!), the action is still stellar. As well as Yen getting to strut his stuff, the film packs in a fair few great screen-fighters including Chris Collins, Mark Strange (who gets to take on Bruce Lee in one of the highlight fights!) and the ever-ace Scott Adkins. He all but steals the film as the bad guy drill sergeant and gets two wickedly choreographed, not to mention brutal, fight scenes. Seeing him and Yen go toe-to-toe is worth the wait and caps the franchise off with a satisfyingly full on fight scene. In addition, the scenes of Ip Man dealing with his age, ailing health and fraught relationship with his son are nicely played and provide a satisfying dramatic counterpoint to the fight action.

Perhaps not as good as its predecessors (least not to this two-bit reviewer!) with Parts 1 and 2 still being the best franchise entries, ‘Ip Man 4’ is nevertheless a solid entry and a decent finale to one of the finest martial arts franchises of recent years.