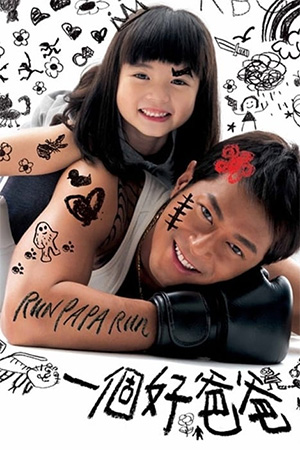 It’s almost inevitable that juvenile delinquent Lee (Koo) will make crime his full-time ‘profession’. Surrounded by the various hoodlums of the area who come to his mother for medical treatment, the impressionable youngster envies the lifestyle he sees and quickly forms his own gang. His cantankerous mother (Miao) tries to straighten his path, but Lee has his eyes on building his own minor empire on the streets of Hong Kong.

After various clashes with the police department, Lee is teamed up with naive lawyer Mabel (Liu) who immediately makes an impression on the swaggering gangster and their professional relationship turns into something more personal very quickly. Equally quickly is Mabel’s announcement that she is pregnant and Lee needs to provide for the upcoming child. He is initially horrified by the developments and sees a child as an end to his ill-advised lifestyle. Yet, when his daughter is born, Lee finds himself prepared to go to any length to be a better father to her, even masquerading as a businessman and painfully changing his tattoo. As his daughter, Heiyi, grows though, it becomes evident that only a life away from crime will save his daughter from a similar fate. Getting out of the triads and cutting away all criminal connections is far harder than starting on the path though.

At first glance, ‘Run Papa Run’ seems somewhat out of place among the pantheon of Sylvia Chang films, a definite diversion away from the realism and subtle social critiques that the director has expertly utilised in the past. This is a intoxicating mixture of the surreal and the mundance where the definite star is a male character quite a distance away from Chang’s usual cinematic focus. Yet, its admirable when any film-maker extends themselves beyond their expected output and in such cultured hands this has all the hallmarks of excellence that have attached themselves to Sylvia Chang’s name. It may almost appear hyper-real at times, a world where visible manifestations of thoughts and dreams come to lucid life, but this is the product of solid source material and a woman who is as accomplished behind the lens as she was in front of it.

This production starts with a startlingly animated credit sequence and retains a visual elan that sets it apart from the usual tales of triads trying to go straight. It may be a storyline that appeared throughout 80s Hong Kong cinema and beyond, but from the beginning until the end ‘Run Papa Run’ has designs on ploughing its on furrow rather than going along a conventional route. Much early humour is derived from the odd tangents the film disappears off into, while the hairstyles during the first half become intimidating characters of their own. Such a zany edge sets this apart from the numerous contemporaries, yet does occasionally divert the narrative from its intended pathos. Nevertheless, even during the moments of absurd comedy and genre parody, there are subtle hints at the dark world surrounding the Lee family.

Louis Koo – in probably his most mature performance – provides narration, punctures reality with little asides to the camera (the fabled ‘fourth wall’ crumbling in the process) and pokes fun at the stereotypical triad leader, full of machismo and surprising sentiment. Chang allows Koo to give the performance of his career, but surrounds him with great supporting players; from Rene Liu to the welcome return of Nora Miao to the big screen, ‘Run Papa Run’ has a cast that is full of talent and experience. Max Mok is sterling support for Koo and brings the genre’s 80s zenith back to mind as one of the familiar faces of that era. Yet its not just empty nostalgia that actors like Ti Lung and Chan Hui Man provide – their gravitas lends itself well to a production with higher aspirations.

Ultimately, this is a story about the love of a father for his daughter and, as such, it delivers all of the poignancy and power it should. Chang achievements are that, even in the moments of mirth, there is an underlying power to the scenes; one particular moment sees Lee having his intimidating tiger tatto changed for his daughter’s sake, a sequence that tell us so much about the relationships in the film. There is a merciful lack of histrionics or show-boating, award-grovelling scenes that larger than life productions tend to allude to and this only helps to make the overall theme relevant to a wider audience.

‘Run Papa Run’ is a story we may have seen before with style that may initially be jarring, yet is ultimately delivered with aplomb. Chang stirs a number of emotions throughout while finally leaving a message about family and the unforgiving underworld our anti-hero tries to leave. It proves to be one of 2008’s most illuminating Hong Kong efforts.