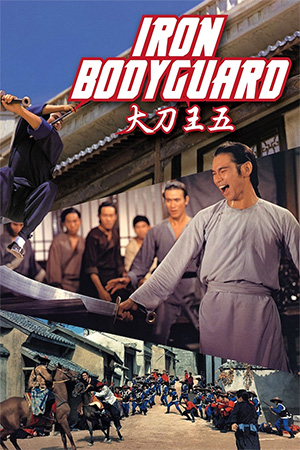 ‘Iron Bodyguard’ is a film that may create immediate curiousity by the joint directing credit that it proudly proclaims. One half of the team is a man who needs no introduction; Chang Cheh is one of the master craftsmen of the martial arts genre and regular readers will know of my admiration for his skills. The other part of the duo is Pao Hsieh Li, a director who started as a cinematographer and later moved into the director’s position with numerous Shaw Brothers films and the above average independent feature ‘Kung Fu Emperor’. The only question that emerges from this directorial teaming is what does each man bring to ‘Iron Bodyguard’ – this is something that will be featured later.

Wang Wu (Chen Kuan-Tai) is the honourable head of a bodyguard/escort company who works in the capital. Though righteous and always willing to help out those in need, he does not involve himself in the political turmoil of the land. All of this changes when he intercedes in an arrest and stands up to the Ching troops, refusing to accept an obvious injustice. His actions are not unnoticed by others though and, from a nearby restaurant, Mr. Tan (Yueh Hua)  watches the proceedings with great interest. Tan is committed to the reformist movement that is bubbling under the surface of the government, much to the anger of the power-hungry Empress Dowager; Tan also sees Wang Wu as a powerful ally in his battle against the ruling powers. However, Wang Wu is in no particular rush to meet Tan and happily continues without accepting his invitation of a meeting. Tan is determined to meet this righteous hero though and so includes himself in a fight that Wang Wu is involved in against an old adversary.  Following their victory, Wang and Tan become firm friends and the former becomes more and more interested in the political cause of the latter.  While Tan gets promoted to the privy council, Wang agrees to help the reforms in any way possible despite the threat of a backlash from the Empress Dowager’s forces. When this backlash finally strikes, Tan sees his reformist colleagues arrested and put on trial throughout the capital; alongside his loyal ‘brother’ Wang, Tan tries to escape the slowly tightening grip of the Ching. Unfortunately, Tan is finally captured by the authorities and subsequently sentenced to execution. In a race against time, Wang Wu vows to rescue the reformists and, along with his band of employees/fighters, hatches a plan to ambush the execution party on their way to the public square.

The idea of having two directors responsible for a film is not a very inspiring one; the immediate thought is of conflicts of styles and overall control. ‘Iron Bodyguard’ quickly dispels these fears and, by the time the credits roll on its 94 minute duration, the feeling is that it has achieved its goals. There have been various thoughts about who actually deserves the lion’s share of the praise (or, in some people’s eyes, blame) for this production, but it mostly appears to be the work of two directors who have successfully combined their visions. Naturally, there are certain traits of each director present within the film: Chang Cheh implements his common themes of brotherhood and the sacrifice for one’s beliefs; Pao Hsieh Li reminds all of his background as a cinematographer with some intriguing shots and nicely framed images. The team make good use of Chen Kuan-Tai and Yueh Hua in their two lead roles – both men are given opportunities to flex their acting muscles in varied scenes – while Shaw Brothers’ famed screenwriter I Kuang fleshes out the characters with an above average screenplay.

Despite ‘Iron Bodyguard’ earning plaudits, the pairing of two directors could hardly be expected to be problem free. At times it seems as if Pao Hsieh Li’s style restrains Chang Cheh’s full thematic flow; the friendship between Wang and Tan develops at a lightning pace which occasionally sacrifices the weightier of elements of the characters. The fact that ‘Iron Bodyguard’ doesn’t have Chang Cheh’s stamp on it throughout perhaps lends some credence to the idea that Pao Hsieh Li was the real commanding force of the production. If this is true, Pao Hsieh Li can still be happy with what is a noble kung fu drama – there’s weaknesses in some of the plot twists, but there’s also good action, fine performances and the kind of bold visual statements that linger in the mind. A polished slice of entertainment from the Shaw Brothers’ vast back catalogue of quality.