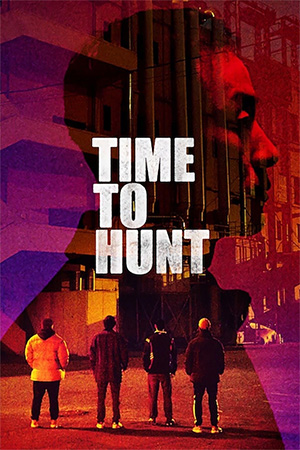 A propulsive action thriller, ‘Time to Hunt’ is set in a not too distant future where a financial crisis has wreaked havoc in Korea meaning money and jobs are scarce, and slums and crime are on the rise. Jun Seok (Lee Je-Hoon – outstanding!) is recently released from prison and reunited with his old friends wastes little time in planning a heist that will get them rich quick and send them to a new and more hopeful life in sunnier climes. The group of young adults decide to rip off an illegal gambling house enlisting the help of an old friend who works there. The now quartet plot a plan, secure heavy weaponry, and pull the heist off near perfectly. As is the way, robberies rarely come without consequences and thus the group incur the wrath of those who run the gambling house, sending a near unstoppable and indestructible killer (Park Hae-Soo) to hunt the young lads down and make them pay.

With some considerable hype, ‘Time to Hunt’ thankfully mostly lives up to it as it’s an often-blistering mash up of genres that despite it’s sizeable running time (a little under 2 and half hours!) levels up in creative ways just when one thinks they know where proceedings are heading. Part social drama, part heist film, part full on action/slasher flick, ‘Time to Hunt’ has ambition to spare. Despite a familiar set-up the film is stylish and confident despite only being writer/director Yoon Sung-Hyun’s sophomore feature effort. A slick, edgy visual style perfectly captures the grit of the near future and crumbling society and while one might think this is going to be about a bunch of annoying youngsters posing and playing at being criminal (admittedly, it does start a little like that!) it’s mercifully far from it. The young cast are all fantastic and encapsulate a lost generation that have nothing and decide to do something to get out of their going-nowhere-existence. They’ve served in the military so can handle automatic weapons, leading to the believability that despite their young age they can pull this crime off.

However, the naivety of the young group is also well realised as soon they’re in way in over their heads once the crime has been committed. The path to their new life is paved with consequences and this fall out comes in the form of the ruthless killer sent to hunt them down. The group find themselves way in over their heads with a killer that likes the challenge of cat-and-mouse stalking and rather than hunting them with a blade, the killer hunts with a fuck-off automatic weapon leading to some thrilling and tightly wound action sequences. No flash, no tricksy editing, no CGI fluff just stalk-and-shoot tension as the young group fight back against a killer who absolutely will not stop.

On occasion it’s ambitions may be far too reaching: running time could be a little tighter, some misplaced dreams sequences and the fact (despite being an incredibly tense and well-staged sequence) the main players are able to run though and shoot off automatic weapons in a large hospital and it’s car park with no one noticing/coming to investigate. These are more niggles rather than outright flaws as the film still works and while the mash up of genres and the direction proceedings take may not be to everyone’s liking, there’s no doubting the skills and thrills on show.

Could be a marmite type of film but this reviewer loved it and ‘Time to Hunt’ once again shows South Korea is producing some of the most exciting cinema around.