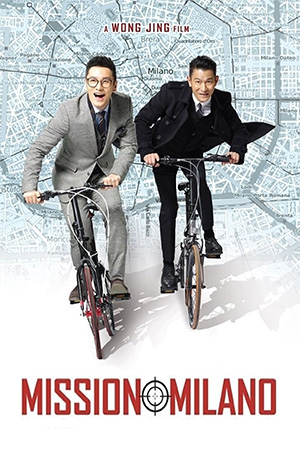 Billionaire entrepreneur and adventurer Louis (Xiaoming) is inveigled into helping suave Interpol agent Hung (Lau) retrieve a deadly new chemical weapon before it gets into the wrong hands. The weapon – known as ‘The Seed of God’ – is stolen during a daring heist by a criminal organisation willing to sell it on to the highest bidder no matter how destructive the results. The pursuit of ‘The Seed of God’ takes the reluctant duo to Europe and, as they move closer to the mysterious cabal known as ‘Crescent’, they decide to call on Louis’ oddball family for help.

Having rode the remarkable success of his ‘From Vegas To Macau’ series, Wong Jing takes a momentary side-step to create an original action comedy. I say ‘original’… ‘Mission Milano’ is exactly what you would expect from Jing; a paper thin plot, overdone action sequences and low-brow humour. And the problem is that it doesn’t have to be this way because the writer/director has shown before that he is capable of more than just throwing ingredients on the screen and hoping they somehow merge into a palatable whole. Unfortunately, while his films make money hand-over-fist, there’s little incentive for him to try anything even slightly daring.

The one thing that can immediately be said about ‘Mission Milano’ is that it’s easier to sit through than the last ‘From Vegas to Macau’ travesty; it’s less bloated, less self-indulgent and slightly easier to digest. That might not be saying much – indeed, it isn’t saying much – but it might act as a partial recommendation. Some of the action is bearable, the locations are all very pleasant and add a touch of the exotic to the story.

Whatever the relative plus points though, the majority of ‘Mission Milano’ is tiresome at best, insipid at worst. As with so many Wong Jing films the running time is heavily infused with scattershot humour that feigns relevance by referring to the whatever the current cultural phenomenon; if loom bands become big again, expect him to centre a whole film around them soon.

‘Mission Milano’ drags along to its conclusion and hints at a sequel with Jing possibly eyeing up the start of another successful franchise. In light of how quickly the ‘From Vegas To Macau’ films dropped in quality after the enjoyable, let’s hope Chinese authorities bring in some archaic law to prevent it happening.