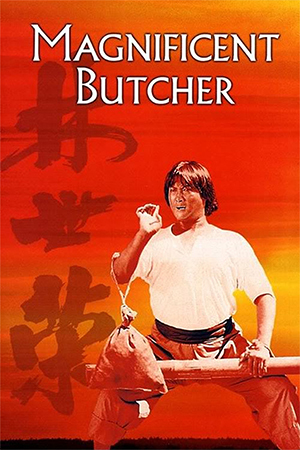 A combination of two of Hong Kong’s legends, Sammo and Yuen Woo Ping, was bound to produce something special. ‘Magnificent Butcher’ certainly lives up to this promise and stands as one of the greatest kung fu films ever.

Butcher Wing (Sammo) is another of Wong Fei Hung’s disciples, albeit the most troublesome. Though good natured, everything he does seems to back-fire. This is soon apparent when one of his actions drives a wedge between his master’s school and that of the formidable Master Kao (Lee Hoi San). When Butcher Wing’s long-lost brother turns up with his wife and arouses the jealousy of Kao’s son Tai Hoi, the feud reaches new heights. With Wong Fei Hung out of town, Tai Hoi frames Butcher Wing with the murder of his distant relation and persuades his father to tear Po Chi Lam apart with his Five Element Palm. Severely injured, Wing is helped nursed back to health by Sam the Seed and taught the next level of Hung boxing. A series of incidents then brings about the ultimate confrontation: Wing’s Hung Fist against Kao’s Five Element Palm.

This film could be recommended alone for it’s exceptional fight action, but as you’d expect from this cast there’s much more on offer. Sammo is excellent as Butcher Wing bringing his usual mixture of innocence, naivety and incredible physicality to the role. Yuen Woo Ping directs this classic with the verve and excitement we all associate with his name; he really deserves a place in the Hong Kong cinema pantheon. Lee Hoi San deserves special mention because this is perhaps his finest hour. He’s always played villains, but rarely ones with the degree of depth that Master Kao has.  An outstanding film.