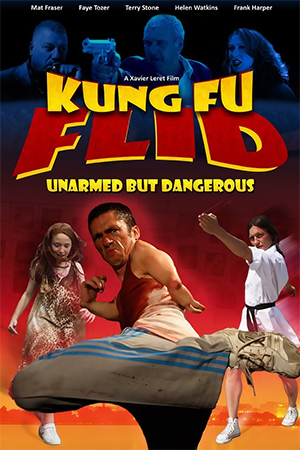 The idea of taking a physically disabled actor and making him into an action hero is certainly a bold one, but it is also a concept that many people would perceive to be nothing more than just a gimmick. Whilst ‘Kung Fu Flid’ tries hard to avoid this pitfall by poking fun at the idea, you soon realise that without its leading actor this would be a very empty vessel.

Jimmy (Fraser) is a thalidomide short-armed man who has ignored all preconceptions about his disability and gone on to become a professional fighter. However, his life suddenly takes a turn for the worse when a group of gangsters make a mistake and come knocking on Jimmy’s door.  In the struggle that ensues, his wife is shot and his daughter is kidnapped but not before Jimmy cracks a few skulls and shoots one of them in the groin. Unfortunately though, the man he shot turns out to be the son of the biggest gangster in Britain who is hungry for revenge. Now Jimmy will need to use all of his skills if he wants to stay alive and rescue his family.

While its choice of leading actor may be original, ‘Kung Fu Flid’ is sadly anything but in the story department. The film weaves a very generic tale of revenge that really doesn’t get expanded upon after the first 15 minutes. Beyond this, all we really get is a handful of laborious flashbacks and some over-the-top torture scenes. It’s also fairly obvious that the film is constantly borrowing from a number of British gangster flicks, particularly ‘Lock, Stock And Two Smoking Barrels’. Both the directorial approach and editing techniques are very similar to Guy Ritchie’s break-out hit, but everything feels dumbed down and distinctly low budget here. Buckets of blood, excessive swearing and scantily clad women are all thrown into the mix to try and add some entertainment value, but all they seem to do is highlight the film’s blatant clichés. The only real plus is actor Mat Fraser who comes across as quite a likeable lead but even this is tarnished by the surrounding cast who are nothing more than laughable caricatures.

When it comes to the action, ‘Kung Fu Flid’ seems to give up pretty early on. The opening sparring match certainly shows some promise, but after that it’s nothing but choppy and poorly edited fight sequences. Most of the time you can barely see what’s going on and the obvious reliance on excessive bloodshed does little to help. It’s also somewhat strange that the weaknesses in Fraser’s fighting techniques are constantly highlighted, and just about every opponent seems to take advantage of his very open torso. Stranger still though, is the fact that there are probably only three main fights and the majority of these see Fraser getting the stuffing beaten out of him before landing a couple of lucky kicks.

Those of you still hooked on the “corr bimey guv’nor” British gangster flicks may find ‘Kung Fu Flid’ a minor distraction. For everyone else though, the film fails to live up to the action-packed title and is far too cheap and bland to impress anywhere else.