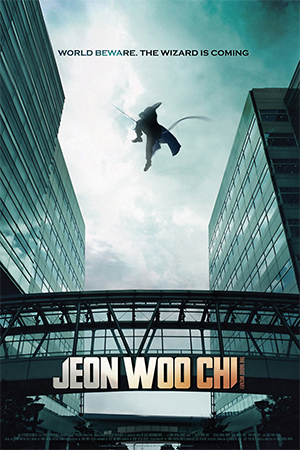 Big budget Korean fantasy flick that is as heavy on the over-the-top comedy as it is on the over-the-top action, ‘Jeon Woo-Chi’ is an entertaining and visually stylish blockbuster but drags on a little with the somewhat grating “comedy” clogging up too much of the running time. A-thinks-he’s-slightly-better-than-he-actually-is sorcerer from the Joseon era, Woochi (Kang Dong-won), crosses paths with a group of escaped demons who are looking for some kind of illustrious magical flute (so they can control something or other!) and after much (comedy) mugging, mishaps and one rather decent mano-o-mano (well wizard-o-demon) scrap, Woochi is trapped in some kind of magical painting/prison (or something) for 500 years. But, wouldn’t you know it, the demons are still running rampant in modern day Korea and, apparently, Woochi is the only person capable of stopping them. So and non-surprisingly he is released and much more (comedy) mugging, mishaps and mucho wizards-o-demons showdowns take place.

Nobly sticking to its comic book sensibilities and backed by what must have been an impressive budget and great production values, ‘Jeon Woo-Chi’, for the most part, is a fun romp as various sorcerers and demons run rampant in present day Korea. While the pace does drag in certain places, the comedy is regularly over-egged (to breaking point) and the main character is often more annoying than he is endearing, there is no denying the visual scope and imagination of ‘Jeon Woo-Chi’. With it’s comic book styling and use of sorcery in the fight scenes, there is pretty much no limit to the visual spectacle as characters fly through the air, replicate at will, cause wholesale destruction in both past and present and in one memorable scene, fight a human size rat! The demons are vividly rendered with some nifty CGI: a giant rat and rabbit convincingly threatening as kung fu demons. Ok, so all the CGI does lean towards the cartoon style (and haters of computer generated imagery will find plenty to pick apart) but on the whole the effects are incorporated well into all the live action stunts and mayhem, giving the film a striking visual look.

Unfortunately the story is a bit haphazard and with all the hamming-it-up, over-egging and shouting from most of the characters, it can wear a bit thin. There are some funny moments, especially with Woochi indulging in all kinds of fish-out-of-the-water shenanigans when he’s transplanted into the present. The film wears its fun proudly on its sleeve and if you can go along with it, ‘Jeon Woo-Chi’ does provide a lot of action packed, sorcery-laden entertainment. The action scenes are big and full of nifty wirework and while the tone isn’t always consistent, the film is still a decent Korean blockbuster aimed at a more family orientated audience.