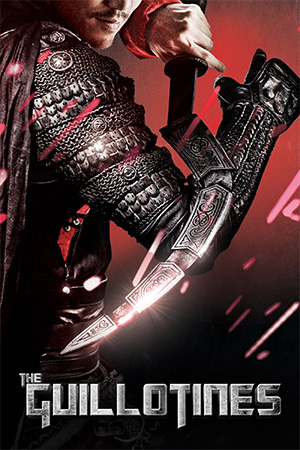 ‘Infernal Affairs’ and ‘Legend of the Fist’ director Andrew Lau re-imagines the 1975 classic ‘The Flying Guillotines’ in the slick but ultimately hollow ‘The Guillotines’. While certainly mounted on a sometimes epic scale and beautifully shot, Lau’s film disappoints due to rushed character motivations, unconvincing drama and an excessive use of slow motion. The Guillotines are a squad of deadly assassins under the command of Emperor Qian during the Qing dynasty. Trained since they were youngsters to be deadly warriors they kill without mercy by the Emperor’s demand using the deadly, swirling, flying blade that gives the brotherhood their name. Commanded to slay rebel leader Wolf (Xiao-Ming), the Guillotines, headed by the strong willed Leng (Ruan), set off into the badlands to complete their mission. In addition, Wolf has also captured one of the Guillotines, Musan (Yu-Chun), and they will now stop at nothing to bring Wolf to justice. Yet, in a time of political turmoil, the addition of the shady Haidu (one of the Emperors’ trusted guards and childhood friend of Leng) to the group, and with the advancement of modern weaponry threatening to make the group’s weapon of choice obsolete, Leng and his devoted soldiers soon find their lives on the line and begin to suspect the man they are hunting may not in fact be the enemy.

With the trailers seemingly promising a blistering action spectacle featuring the sharp disc whirling guillotine weapon, it will perhaps come as a disappointment (to some) that ‘The Guillotines’ features only a smidgen of action and said weapon in use. Other reviews have certainly highlighted this already but it should be noted that those looking for high-flying guillotine action may be disappointed.  For the opening twenty minutes there is a good chunk of guillotine action with the capture of Wolf and his subsequent breakout showcasing some breathtaking action and lots of high-flying, limb severing guillotine awesomeness. However, after these show-stopping scenes that’s pretty much it for the rest of the two hour run time. Even the cool, stylish, almost darkly steam-punk look of the film (due in part to the Guillotines’ weapon and their slick looking uniforms) is jettisoned for a more traditional epic look as the squad don normal clothes and go on the hunt for Wolf. And instead of a thrilling chase we get a lot of hit and miss drama.

Now the switch to drama and character development is not necessarily as bad thing and fans of excessive plot will surely appreciate this but, and unfortunately, everything feels rushed, and uninvolving. There is a lot going on from the tension between Leng and Haidu (well played by Shawn Yue), to the advancement of gunpowder weapons replacing blades, to the concept that the Guillotines may be backing the wrong team meaning themes of loyalty, brotherhood and the impending advancement of Western influence are all vying for screen time. Again, all fine and good but with the rushed editing style, zero character building for the Guillotines (meaning one really doesn’t care what happens to them), random flashbacks, and an awful lot of slow motion deaths and lengthy staring competitions between various brooding males, means ‘The Guillotines’ comes off as a somewhat shallow and wasted opportunity.

There are flashes of brilliance: the aforementioned opening twenty minutes, a rather brutal tone that doesn’t shy away from the violence of the time (and some rather nasty death scenes!) and the production values and photography are often stunning. However, despite these flourishes, ‘The Guillotines’ never convinces as an epic drama and underwhelms as a grand-scale action film.