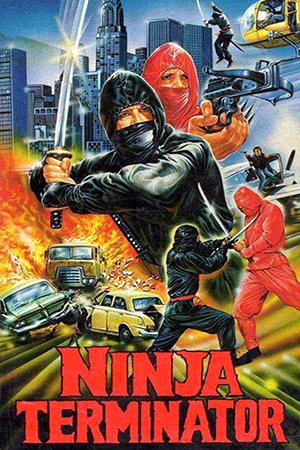 For most Westerners, American actor Richard Harrison is probably best known as the man who turned down the title role and recommended Clint Eastwood for Sergio Leone’s ‘A Fistful of Dollars’. However, the truly old school martial arts movie fans amongst you will no doubt remember him most fondly for his appearances in a number of low budget 1980’s ninja films. During this time, director Godfrey Ho horrendously exploited Harrison’s image and spliced him into several other movies without his prior knowledge. One such example of this is ‘Ninja Terminator’, a film that you would naturally assume to be terrible considering the conditions in which it was made. Well, keep reading because you are in for a shock…

The highly secretive and mysterious ninja technique is still alive, and the divine power is embodied within a golden ninja warrior statuette. To gain the hidden super-strength, one ninja must possess all three parts of the statue and recite the sacred incantations. When the statue is stolen by three of the Ninja Empire’s top students, it disappears for two years as none of the men are willing to share the ultimate power. When Interpol and a rival gang also become involved, the three ninjas realise it is time to face each other in mortal combat and decide once and for all who is destined to become the true Ninja Terminator.

In terms of actual filmmaking quality, it’s pretty fair to say that ‘Ninja Terminator’ sits firmly at the lower end of the spectrum. The cut ‘n’ splice technique used to put together the production understandably means that the film displays very little in terms of plot and the majority of the dialogue is just mindless banter that fills in the gaps. As is to be expected, this also extends into the acting and you can often clearly see that the actors are responding to an entirely different storyline. Harrison himself is barely used and the majority of the running time is spent on Lam Chi-Foo’s (AKA Jack Lam) character, even though his antics seem to have nothing to do with the main premise. However, if you are watching a film with the title ‘Ninja Terminator’ then I highly doubt you are expecting Shakespeare, and it’s the hilarious clichés and overall silliness that truly make this movie worth watching. This is the kind of film that has been satirised as the “standard chop socky” for many years and the real reasons to watch are the laughable dubbing, overly dramatic reaction shots, Hwang Jang-Lee in a golden wig, and a talking toy robot, to name just a few.

It may not be up to much when it comes to storytelling, but as far as action is concerned ‘Ninja Terminator’ really dishes up the goods. The film is absolutely littered with high-class fight sequences and if you’re a fan of super kickers then you definitely won’t be disappointed. The standout performer is clearly Lam Chi-Foo, a very talented martial artist who only appeared in a handful of films. Lam predominantly fights using his feet and watching him dispatch of several bad guys using intricate kicking combinations is nothing short of superb. As if this wasn’t exciting enough, the final battle pits Lam against none other than Hwang Jang-Lee, and as any self respecting kung fu fan already knows he is one of the greatest super kickers of all time. When it comes to the ninja antics themselves, these are surprisingly short-lived and, aside from the closing 2-on-1 duel, aren’t nearly as fun as the film’s other fight scenes.

Although Richard Harrison may look back at this point in his career with some disdain, ‘Ninja Terminator’ actually emerges as a pretty entertaining outing. The film may be spliced together from three other features, but it somehow manages to find just the right mix of cheese and top notch action to make it more than watchable.