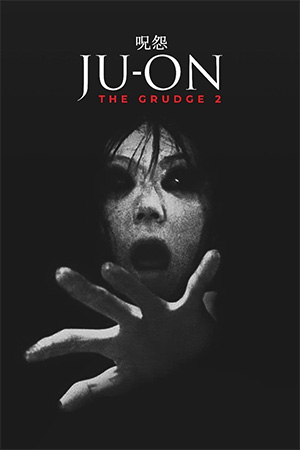 Takashi Shimizu’s horror franchise rumbles on with ‘Ju-on 2’.  Misleadingly titled, this is actually the fourth movie in the ‘Ju-on’ series, following on from the previous cinematic outing and two initial straight-to-video offerings.

Working from the credo, “If it ain’t broke don’t fix it”, Shimizu provides more of the same in ‘Ju-on 2’, but luckily his nightmarish spectres remain sufficiently chilling to make this a welcome return.

Kyoko (J-Pop singer Sakai) is a low-budget horror actress called in as a guest presenter for a haunted house TV show.  Inevitably the house is the hellish locale from the previous ‘Ju-on’ instalments, and the grudge is soon affecting Kyoko and other cast and crew from the show.

Shimizu carries many things over from the previous movies, most notably the episodic structure, each chapter named after a different character, and a non-linear approach to storytelling.  Like its theatrical predecessor this sequel plunges into a sea of horror from the opening, as Toshio, the blue-skinned terror tyke, manipulates Kyoko’s husband into crashing his car, resulting in her gruesome miscarriage.

With her husband in a coma, Kyoko becomes embroiled in an investigation of the demonic house, while flashbacks depict events leading up to the TV crew disturbing the malevolent tenants.

While Shimizu’s first big screen ‘Ju-on’ played on the illogicality of pure horror, this sequel’s story is more conventional fare, settling for the “vulnerable female investigating the supernatural” plot of so many other Asian horror offerings.  While never as pedestrian as ‘Ring 2’, ‘Ju-on 2’ does not demand as much of its audience and answers most questions by the inevitable final shock.

It also slots more comfortably into a tradition of horror, referencing ‘The Blair Witch Project’, ‘The Eye’, ‘Dark Water’ and, with Kyoko’s mysterious re-pregnation and its memorable pay off, Lars Von Trier’s ‘The Kingdom’.

Shimizu again stages fine moments of bewildering plastic reality, such as a schoolgirl (Ichikawa) flitting between nightmare and the waking world until the distinction is erased, and various unrelated disturbances foreshadowing a double murder.  The irresistible idea that electronic recording equipment can detect the supernatural is again put to good use with unseen spectres revealing themselves on video and audio tape.

A naturalistic, at times near TV-movie, style is once more employed to place the chills in a recognizable universe and the cast convey a requisite amount of terror to, for example, convince that a malicious wig actually is scary.  And for such near-comedic moments, Shimizu expertly uses his killer punchline; Fuji’s Kayako.  Ozeki may get more poster coverage, but with her bug-eyed stare of unchecked fury and jerky, editing assisted movements Fuji’s creation proves herself scarier than ‘Ring’s Sadako, and a genuinely monstrous image of fear.

Shimizu has carried a simple premise of random terror and death through four homegrown instalments and a Sam Raimi approved remake.  While ‘Ju-on 2’ is another rewarding journey through a landscape of fear and loathing, now is the time for its creator to terrorise avenues new.