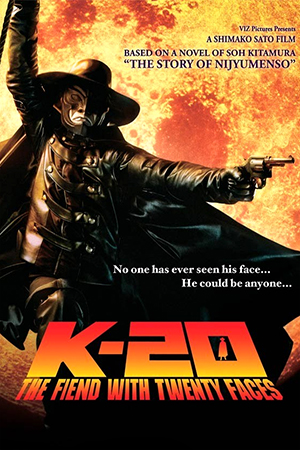 Set in an alternative Japan, where there was no WW2, at the tail end of the 1940s this big budget and good looking romp deals with a mysterious thief called K-20. A master of disguise, he runs across night time roof tops complete with cape and mask, stealing from the rich. In an attempt to deflect attention and the pursuit of the police from himself, K-20 sets up a humble circus acrobat, Heikichi (Kanshiro), making him take the fall for his latest crime. The city of Teito now believes Heikichi to be K-20 and after a spot of police brutality, he escapes prison and finds himself on the street. Once he is done feeling sorry for himself and making some new friends, Heikichi decides to pick himself up, unmask the real K-20 and prove his innocence. What follows is a fun old style pulpy romp which also finds time for some comedy, a deadly energy controlling device the bad guy wants to get his hands on and even some cool free running action.

Boasting a sizable budget, slick production values and an enthusiastic performance from Takeshi Kanshiro (‘House of Flying Daggers’, ‘Red Cliff’), ‘K-20’ is blockbuster fun that harks back to the days of the 1930s and 40s serials. The alternative 40s setting is captured gloriously with big sets, widescreen photography and a little CGI enhancement creating a stylish alternative Japanese city. Comparable to the likes of ‘The Shadow’, ‘K-20’ is chiefly about fun and adventure. The makers infuse the stylish proceedings with a sense of excitement as Heikichi trains himself to be the acrobatic hero to K-20’s boo-hiss villain. Takeshi Kanshiro is excellent as the likable hero and carries the picture with his infectious heroism. He has good support from the always quiet cool Toru Nakamura (‘Tokyo Raiders’), Jun Kunimura (‘Kill Bill’) and the very fun and pretty Takako Matsu (‘The Hidden Blade’). She brings a lot of feisty fun to proceedings, adding a welcome streak of gentle comedy but holding her own in all the heroic daring do.

While providing a unique setting and a sense of old school fun, director Shimako Sato doesn’t skimp on the adventure side either. When Heikichi finally gets around to trying to trap K-20 and battle him in several set-pieces of run and chase acrobatics, the action sequences are infused with some impressive free running. With many of the confrontations set on top of and running through various buildings and structures, the filmmakers create several sequences of adrenaline fuelled free running action. Arguably the best seen this side of ‘District 13’, the scenes are wisely shot wide with little fussy editing allowing to create a sense of momentum and exhilarating adventure.

Unfortunately, ‘K-20’ can’t quite keep its momentum going all the time. At well over two hours the film is a little long. While it’s commendable that the film takes it time to build up an origin story for Heikichi the film gets bogged down in too many subplots and distractions. Yeah, most of it all ties together come the end but the film perhaps takes too many detours, especially with the whole Heikichi befriending a group of orphans subplot, that the sense of fun and adventure dips somewhat. Thus the character of K-20 often feels like a supporting character in his own movie and Sato can’t help but let scenes and situations drag on a little too long with characters explaining and talking things out for far too long. A tighter pace would have helped and stopped the film from the unfortunate periods of sagging.

Still, on the whole and despite these criticisms, ‘K-20’ is a fun affair which mostly manages an entertaining balance between character, fun and action. It’s a stylish and enjoyable nod to the adventure serials of yesteryear that for the most part provides some good looking blockbuster thrills.