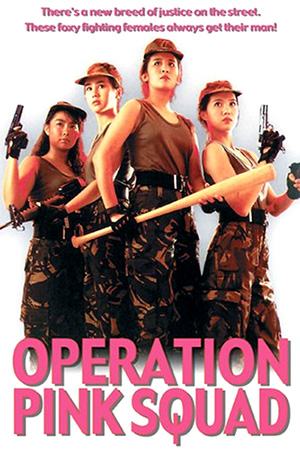 After their success in the academy, four female cops are thrust into the male-dominated world of the police force. The sudden opposition from the male police officers forces the quartet to forget their minor squabbles and team up against their rivals. Two of the team, Siu Mui (Ng) and ‘Shy Grass’ (Chan) are later assigned to a stakeout operation focusing on a blind musician (Din Laap Man) who is connected to a diamond robbery. Although the musician is innocent, the police are sure that his former girlfriend – the actual robber – will be back to reveal where she’s hidden the gems. After a few minor mis-haps, Siu Mui manages to befriend the suspect though her feelings gradually develop into something more substantial as time goes on. The violent ex is not far away though and is very keen to recover the gems she escaped from prison for.

With obvious allusions to Wellson Chin’s ‘Inspector Wears Skirts’ films, Jeff Lau’s mixture of comedy, action and drama is a diverting piece of popcorn entertainment. Taking its cue from Chin’s popular series, ‘Operation Pink Squad’ is uneven and has a plot that is full of holes, but its charm comes from that 80s energy that was so pivotal to so many action comedies of the time. Jeff Lau constructs some very amusing situations, most notably the scene where Sandra Ng is trapped in the suspect’s flat, and makes sure the pace zips along quite nicely.

Key to the film’s strengths is Sandra Ng, an actress who is now seen as one of the most talented performers in Hong Kong. In those halcyon days of the 80s, Ng was the loud and goofy stooge who acted as comic relief while the beautiful actresses around her played it straight. Her performance in ‘Operation Pink Squad’, though, allows her to display those awkward traits, but as the film turns more dramatic near the end, she is then allowed to expand her range. It is therefore clear that much of the enjoyment of ‘Operation Pink Squad’ also hinges on its excellent central performance.

When talking about films of this nature, it is obviously understood that they are not high art, but they never allude to those lofty heights anyway. What the potential viewers will get with this enjoyable production is a solid combination of some amusing comedy scenes, a few dramatic moments and a couple of well choreographed action sequences – Ann Bridgewater’s short, sharp fight with a small army of aggressors is a definite highlight. ‘Operation Pink Squad’ might not be to everyone’s tastes – it tries to absorb too many genres to be a total success – but it certainly passes the time adequately.