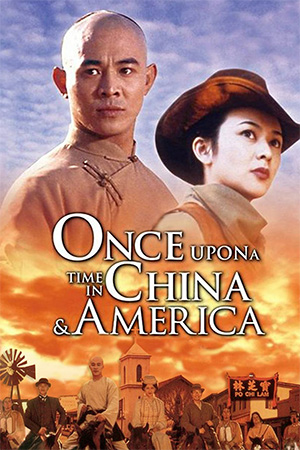 Jet Li returns to the role which made him a household name in Hong Kong – Wong Fei Hung. This time though, the action is taken out of the east and put into the Wild West.

Having already established Po Chi Lam in his native Canton, Wong decides to check on the progress of the newest branch that has opened in the newly-colonised American land by old student Buck Tooth Sol. Along with now fiancée Aunt Yee and trusty sidekick Clubfoot (known as Seven in this) Wong makes the long journey west. Shortly into their time on American soil, the Chinese travellers befriend a young gunslinger named Billy who is found in the middle of the wilderness. This new addition to the wagon train soon proves his worth when a short stop brings the travellers into conflict with Indians and Wong, Clubfoot and Billy defend the families who are making the journey alongside them. In the ensuing battle though, Wong is separated and subsequently loses his memory after hitting his head on a rock. Soon after, the Chinese folk hero finds himself adopted by a tribe of Indians who see his martial arts ability as a definite advantage in their battle against a rival tribe. Events soon lead to the inevitable reunion between Wong and his former friends, but they soon find that, not only does he fail to recognise them, he also sees them as potential enemies. Things take a further twist when a group of bandits led by Mad Wolf plan to rob the very same town as the heroes are now stationed in and care little for the lives of the numerous civilians.

The first ‘Once Upon A Time In China’ featured numerous references to the oppression of the thousands of Chinese who went to the West in search of a better life and therefore it would seem an ideal place to end the long-running series. However, fans of the first two will be sorely disappointed by ‘Once Upon A Time In China And America’ and will no doubt feel somewhat short-changed. Whereas parts one and two had a flawless blend of social/political commentary and action, something rarely achieved before or since, this sixth part seems to be more of a comic book story. The old ‘hero-loses-memory’ plot-line is recycled once more and used in a particularly lame way as are a posse of Indians who sound like extras from Beverly Hills 90210. Had the film just capitalised on Wong’s experiences with bigoted Westerners and then expanded upon the final robbery, this could have retained the qualities that were expected. However, the producers and director bite off more than they can chew. What is very surprising is that the aforementioned director is the legendary Sammo Hung – a man who has turned out classics in his time. The main reason for watching is the exciting action that keeps the viewer gripped to the end; Xiong Xin-Xin’s battle with Jet Li is a definite stand out. It says a lot for the film, though, when the best scene has Clubfoot impersonating the villains from the first two Once films in an effort to restore Wong’s memory.