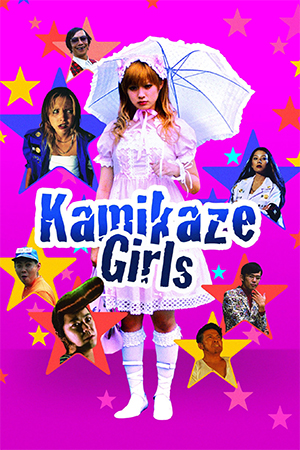 A breezy, colourful and touching tale of friendship, ‘Kamikaze Girl’s might not be the full throttle experience its title and trailer suggest but it’s still a creative, quirky and often heart warming film. Based on the novel by Nobara Takemoto, the film crams in all kinds of kookiness including 18th Century Rococo fashion, girl motorcycle gangs, materialism, animated sequences, ridiculous hair-do’s and embroidery. Yes, embroidery!

On the surface, Tetsuya Nakashima’s film is an exercise in style and a gentle pastiche of Japanese culture. Despite what looks like a low(ish) budget, the film is always colourful and creatively shot, Nakashima utilising animation, different film stocks, freeze frames and characters talking directly to the camera to full effect. He’s also not afraid to poke fun at, albeit in an affectionate way, Japanese youth culture and Japan’s (and modern society’s the world over) often materialistic obsession with clothes. Everything from over-the-top fashion to buying cheap branded track suits gets made fun of, all characters seemingly (somewhat) obsessed with the clothes they wear.

But underneath all the off beat antics, ‘Kamikaze Girls’ is really about the friendship of two girls. Momoko (Fukada) is a lonely girl, being brought up by her (sort of) well intentioned but pretty useless father and is obsessed with the Rococo period. She takes to wearing frilly costumes wherever she goes and is seen as a misfit in her countryside surroundings. Ichigo (Tsuchiya) is a brash, wannabe tough, biker girl who forms an unlikely friendship with Momoko. They stumble through various misadventures, falling out along the way, before eventually realising, despite being very different from one another, they need each other. Funny, sad, touching and a little bit bonkers their blossoming friendship gives the film its sweet, affectionate heart. Both the leads make their characters likeable, despite the over-abundance of kookiness and lots (and lots) of shouting.

Some may find the constant mugging and outlandishness of some of the characters and situations grating and some may be disappointed that this isn’t as mad, crazy and offbeat as a lot of other off-the-beaten track Japanese cinema, but ‘Kamikaze Girls’ is a fun, gentle(r) slice of kooky Japanese celluloid with a refreshing female slant and enough gentle kookiness to put a smile on your face.