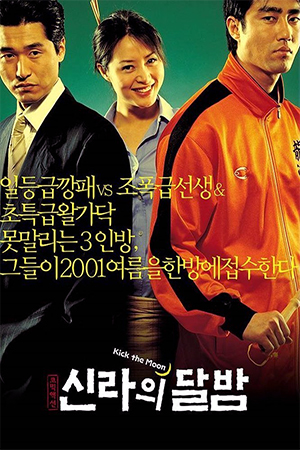 Sometimes the experiences of high school are hard to leave behind and that’s the problem facing the main characters of ‘Kick The Moon’. Park Young-jim (Lee Sung-Jae) and Choi Ki-wong (Cha Seung-Won) were two very different people in high school. Young-jim was the nerdy, quiet type who studied hard while Ki-wong was the tough, outspoken kind who led his school in an infamous fight between an opposing school. The fight has gone down in legend and the two remember it for very different reasons. Now grown up, Kiw-wong is a teacher and still likes to think of himself as a tough guy. Young-jim’s life has taken a very different path as he has immersed himself into the gangster life and returns to his home town with the intention of getting rid of some local gangsters who are claming the turf as their own. The two former school mate’s paths cross in more ways than one when they both fall for the pretty, and very outspoken, sister of one of Ki-wong’s pupils.

Kim Sang-Jin follows up his breakthrough hit, ‘Attack The Gas Station’, with a cheeky and often funny, if overlong, look at how the need to act tough and prove you can fight never really leaves you, even many years after high school. Very much looking at how ridiculous males can be when it comes to proving they can fight, especially when the affections of a woman are involved, ‘Kick The Moon’ shows how this need, especially in high school, affected two very different people. Despite being the tough guy who leads his school into the infamous fight, Ki-wong is basically just an overgrown kid. Confident he may be but his bullheadedness often shows him for the loud mouth fool he is. This is especially apparent when he is trying to mould a group of four young students (who are all desperate to prove themselves as great fighters and get into a local gang). Cha Seung-Won puts so much energy into playing Ki-wong he often borders on tipping the character over into unlikeability. This is perhaps the point, as his constant male aggressiveness always makes him look the buffoon rather than the hero. On the flipside, Young-jim has turned from a meek individual into a slick, sleek gangster. Exuding a quiet authority, he even begins to act the fool and flares up his old rivalry with Ki-wong when they both fall for Ju Ran (Kim Hye-Soo).

Throw in a surfeit of inept gangsters, a bunch of high school wannabes and enough farcical testosterone fuelled comedy and ‘Kick The Moon’ is basically the anti-‘Fight Club’: where fighting doesn’t make you feel alive and part of something but pretty much makes you an incompetent fool. Kim Sang-Jin wisely steers away from any dark analyzation of youthful violence and male testosterone and has a blast sending up gangster posing and male competitiveness. This leads to lots and lots of shouting and most of the characters getting hit around the head repeatedly. The comedy often varies, Kim Sang-Jin sometimes stretching the limits of on screen shouting, mugging and the obnoxiousness of characters. It’s all played pretty broad but the film is often energetic and despite being a little overlong in the run time department, whisks along at a colourful pace.

The tone does vary a little too much with some rather violent fight scenes clashing with more comedy based ones but Kim Sang-Jin keeps everything bubbling along nicely and often keeps you guessing as to what ridiculous antics the characters are going to get themselves into next. Plus, Kim Hye-Soo has to be on of the most attractive Korean actresses around and her character is infused with such an infectious energy (proving just as feisty as the guys) she more than makes up for any of the flicks shortcomings.